By Heather Iacobacci-Miller September 11, 2010
Friday Follow Up
In case anyone was curious, yes, we did indeed enjoy another Pizza and Pool Friday. We're so predictable. It's fun though, so why change that? We also watched The Lost Boys. Believe it or not, I had never seen the movie. That came up in conversation last weekend, so Jason quickly added it to Netflix. I really wish I had seen it back in the day, because now it's a bit cheesy. But back then? I'm sure it rocked.

Chest and Wet Run
This morning it was dark and rainy again. What is up with this rain all of the sudden? Jason and I were planning to run today on the river trails. I decided to go ahead and get my chest work done and hope that the rain cleared out in the meantime. I did a set of pushups followed by a superset of 3x8.

Pushups with toes on stability ball - 24

I also did some standing ab work.

The rain did let up, so we headed down to the Big Dam Bridge as our starting point. We just couldn't stand the thought of running our usual neighborhood route today. I knew it wasn't going to be a long run today. I just wanted to do do 4 miles. The first 1.5 felt pretty good (light drizzle didn't hurt), and we kept up a pretty fast pace. But once we turned around, bam, head wind. I swear it felt like running in mud it was so strong. Jason was really hurting (hip and heel) so he dropped off at 3 miles and I continued so I could finish out the 4 miles. It was a fairly painful run today, but mostly because of the steady 12 mph head wind. I'll call it resistance training and move along.


Errands and Tailgating
After we got back, we both ate lunch then headed out for a few errands. I wanted to hit up Barnes & Noble for a book and some magazines to take with me on my work trip to Dallas. I also wanted to stop and find a new insulated lunch "box" for the trip. We ended up not making it anywhere for the lunch box, but we did hit Whole Foods to grab some food to take with us for tailgating. We got an Edamame Succotash, a Mock Blackened "Chicken" and some Sundried Tomato Chipotle Hummus with Whole-Wheat Flax and Onion Pita Chips

Then it was time to head over to War Memorial to do some tailgating. I am not a big football fan at all. But, tailgating I can do. We have some friends who pay for a nice spot (same spot) each season and they get there early and set up camp, so to speak. It's really sort of complicated, the Arkansas Razorbacks belong to the University of Arkansas in Fayetteville. They used to always play their home games in Little Rock (the capital city) until the UofA built an incredible new stadium. However, there was so much flack from fans to keep some games in Little Rock, that two games a season are still played here, where there is no football team. So, needless to say, when the game is here, the tailgating parties are HUGE. Rain, sleet, snow, 100+ degree temps, nothing will deter Arkansas fans. Tailgating takes place on the public golf course just outside the stadium. Here are some pictures I took today. 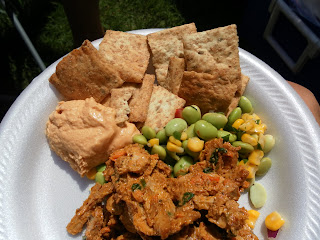 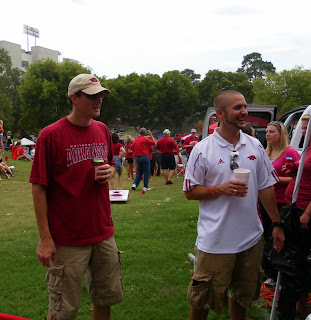 Jason & Troy (has the spot) 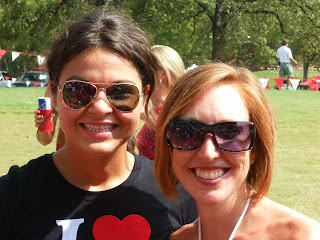 Shot of the tent city from where we were.

We had a great time catching up with friends, and running into several friends who were out and about as well. The rain completely cleared up and the sun came out in full force - HUMID. Karla decided that we were all glowing not sweating ;-) Sounds so much better doesn't it?

Do you enjoy football or do you just enjoy the parties like me?

Right now Jason is watching the game (we didn't have tickets to the game). I must say I am really glad to be home, showered, in PJs and with A/C going. I have no idea what we'll do for dinner tonight. I need to start packing for my Dallas trip, so I wanted to go ahead and get the post out. I hope everyone has had a great Saturday! And if you're watching football, I hope your team is winning!