By Heather Iacobacci-Miller September 20, 2010
Major DOMS
Man Monday came around far too quickly in my opinion. I doubt many will disagree. Jason's alarm went off at 5 am for swim. I was snoozing so good too. Did I get up? Oh heck no, rolled over and crashed hard until my alarm went off at 6:23.

I have some serious DOMS (delayed onset muscle soreness) going on from my leg workout yesterday. It was not fun getting up in the middle of the night to go to the bathroom. Made me think long and hard about how badly I really needed to go ;-) I wasn't sure if today was going to end up being a rest day for me actually. Just couldn't think of anything I could do that wouldn't kill my legs any more. But, I do know that sometimes it's really helpful to get them moving and loosened up.

I ended up doing shoulders and MMA Boxing at lunch. I seriously didn't think I could handle a step workout safely, and running was out of the question as the temps were due to hit close to 100 again today. Who said summer was over? It sure isn't here.

I did supersets for shoulders adding on reps: 3x10 rather than the 3x8 I've been doing. I did maintain the same weights though for the extra reps so that made me feel good. I actually had a really strong weight workout.

I had hoped to get in abs today, but that just didn't happen. I'll count the boxing as abs if you all are ok with that ;-) As for the legs? Um, still major ouch. I was glad that I did the workout. It wasn't leg intensive, but I was moving. But sitting most of the day at a desk does not help sore legs. I may be smelling like an old lady with my muscle creams tonight.

I'll admit that I was super lazy this weekend in terms of getting errands and chores done. I don't regret foregoing chores, but am not regretting not hitting the grocery store. It seems like we have one piece of any meal, but not all the ingredients to complete anything. We only have frozen peas and corn, half a yellow squash and some Japanese eggplants. Jason finally made the executive decision to run over to the store close to us. Usually we do not go there because it's really really crappy, so that sheds light on the situation.

Anyway, after much debate, lots of back and forths and combing recipe ideas, we ended up making Roasted Sweet & Baking Potatoes, Crispy Baked Chikn' Seitan Patties (my recipe just made into patties) with a Portobello Sauce, and Garlicky Squash & Zucchini.

For the squash and zucchini, I simply sauteed the with white onion, lots of garlic, parsley, oregano, salt, and black pepper. For the potatoes, we spiced with rosemary, thyme, red pepper, black pepper, garlic, parsley, salt and baked for approximately 30 minutes at 400 degrees.


In large skillet, saute onions, spices, mushroom, and onions until soft. Add in the wine reduction to the onions and mushrooms and let continue to cook. If not thickening, make a slurry using cornstarch and cold water mixing together making sure there are no lumps then adding in to the skillet.

Since we had the oven on, we decided to use panko breadcrumbs (seasoned with garlic powder, salt, oregano, parsley, red pepper) to coat the sietan patties with and bake to crisp. 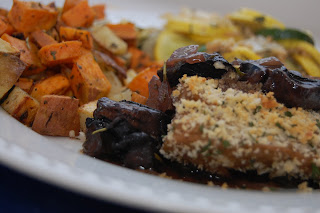 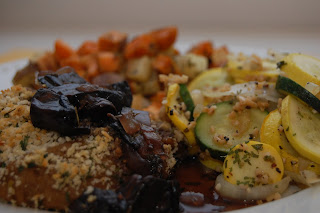 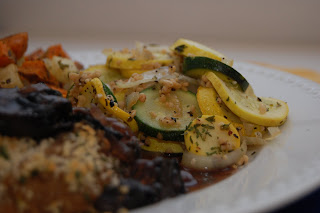 As a note on the sauce - if you don't have time to let it really simmer and thicken, I would advise using 1/2 cup water and 1/2 cup of wine with 1 bouillon cube. Also, if the sauce is too salty, add in some honey. We got hungry and impatient. But, the sauce turned out really well overall.