By Heather Iacobacci-Miller September 19, 2010
Mexican Birthday Dinner
Well, last night Jason was wanting some sort of Mexican meal for his birthday dinner. Originally, I was going to make quesadillas. But then I decided I did not want to stand over the stove browning them up and all that. We had some leftover Spicy Black Bean Hummus, so I thought about burritos perhaps. My friend Alicia's hubby had requested enchiladas (you must check out her recipe), so I piggy-backed off of her dinner plans. I thought about calling the dish "The Whole Enchilada" but then figured I'd never remember what was in it. So we'll go with Chipotle Black Bean, Chikn' & Veggies Enchiladas.

In large skillet, saute onion, bell peppers and garlic until soften, then add in squash, zucchini, seitan and spices. Saute until squash and zucchini are done.

In sauce pan, cook tomatoes, sauce, garlic, and spices until starts to reduce and thicken.

Spread hummus on tortilla, top with Daiya, and veggie mixture then roll tightly and place seam-side down in prepared large rectangle casserole dish. Top with the sauce, Daiya, tomatoes, and green onions. Bake approximately 25-30 minutes until edges are crisp and "cheese" is melted. 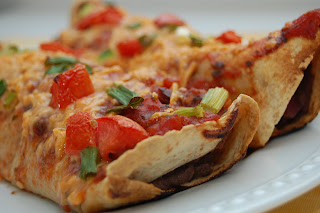 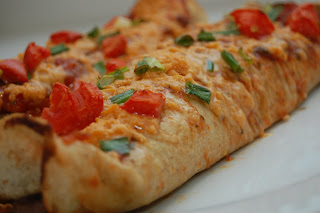 These turned out so good. Huge hit for the evening. The Daiya is just so creamy when melted.

We pretty much spent the afternoon playing pool and listening to music. Heath was worn out from the day's events, but Maddie never stops and was still trying to get the last drops of peanut butter out of her Kong toy right up until bedtime. 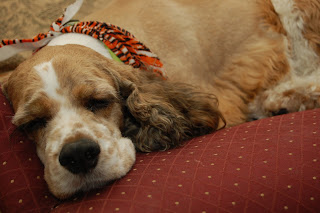 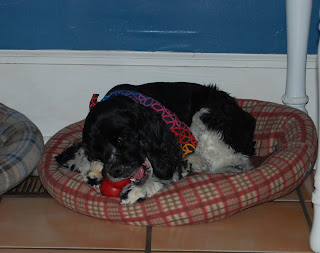 Shaky Legs Sunday
This morning I got up thinking that Jason and I might go run together. He really wanted to ride his bike instead, and I was feeling less than enthusiastic about running to be honest. Sunday's are usually my leg days. Last Sunday I ran before legs, so the focus wasn't as much on the weights as I would have liked. Today was all about the legs though.

I then did half of Cathe's HIIT Pyramid. The first exercise is plie jacks and I thought my legs were going to just crumple. Since I didn't have it in my to do the whole HIIT workout, I did 2 combos from MMA Boxing as well. Let's just say that going up and down the stairs today has been tricky.

Sunny Salad Sunday
While I worked out, then lounged and read on the patio, Jason went for a long bike ride. As I did yesterday, he underestimated how hot it was going to be today. We had a week of cooler weather with lower humidity, but it's right back to summer now with temps in the upper 90's and humidity. It was a gorgeous day despite the surprising temps. There wasn't a cloud in the sky. Love blue sky days. It made for super relaxing lounging. I really had hoped to make some dog treats and get some more chores done. We really should have gone grocery shopping too. But sometimes relaxing trumps productivity in my opinion.

Tonight we'll have a Grilled Tempeh and Veggies Salad. We had a super late lunch, so dinner will be a bit later. I hope everyone is having a great Sunday.