By Heather Iacobacci-Miller September 28, 2010
Sorry for the delayed Monday post. Comcast went down right before I was ready to submit. Our internet has been really effing up a lot lately, but this was the really annoying and ill timed. It was still out before I went to sleep around 9:15. Gotta love technology right?

Soup on Sunday
Well, yesterday the temps just steadily continued to inch down. We ended up having soup for dinner while watching The Book of Eli, which I thought was really pretty good. Though, I will admit to taking several breaks to get the soup started and check on it. I have such a hard time sitting all the way through a movie. We weren't just starved because of our late pizza lunch, so I thought I'd make a lighter type of soup (as in more broth). I opted for a Vegetable and Chikn' Seitan Soup.

Directions:
In large pot, saute onions, carrots, and garlic until onions begin to soften. Add in remaining ingredients and allow to cook until carrots are cooked through, approximately 45 minutes. 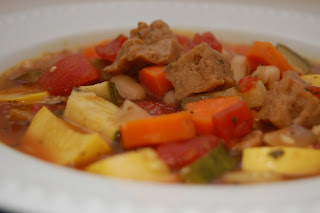 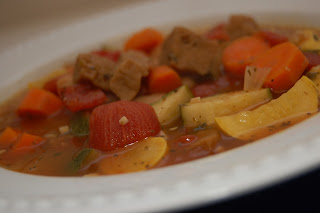 This was so incredibly easy to make, yet so tasty. I can't believe there was a time when I wouldn't even consider soup for dinner.

Shoulders & a Run
This morning it was only 53 degrees on my way in to work. One would think that would mean the A/C wouldn't be cranking right? Wrong. It was hovering around 67 degrees in the office. My toes were completely numb by lunchtime. I pretty much worked out just to warm up! I did shoulders as super sets of 3 sets of 10 reps:

I had a good, strong workout actually. I need to drop the reps and try increasing the weights now, or I need to do a couple of weeks of something entirely different like muscle endurance or perhaps pyramids. I feel like I have been stuck at the 8 to 10 reps for too long and haven't been increasing my weights like I really should.

I had asked Jason if he might want to run with me after work. He sounded less than enthusiastic about the idea, so I went ahead and headed out solo right after I got home. It was about 78 degrees, low humidity, with a light breeze. It felt so incredibly pleasant compared to what the temps have typically been around 4:30 pm. In fact, the weather man just said that this time last week it was 97 degrees (it's just after 6:15 pm) and only 75 now.

I got in a solid 35 minutes before calling it quits. My hamstrings were getting so tight that I just physically couldn't continue running. I did stretch and tried to roll out the kinks with my handy dandy tennis ball.

The temps are heading downward again. While soup again sounds appealing, we're roasting veggies and tempeh for a Roasted Tempeh & Veggie Salad. I was being a bad blogger and eating rather than taking pictures as this is a definite repeat.