By Heather Iacobacci-Miller September 18, 2010
Pizza Surprise
Ok, so you already know that last night was Pizza & Pool Friday. But I did something different with the crust that I am really happy about. I randomly decided to add in 2 tsp of nutritional yeast flakes. I was thinking of adding only for taste. What I failed to think about was that it's yeast (duh) so it made the dough rise even more - but this was perfect. The crust turned out super soft. While we liked the recipe as it was just fine, I think adding the nutritional yeast flakes gives me a second option for the crust. Now I have one slightly thinner, firmer and one thicker, fluffier. YUM.

Running in My New Kicks
Yesterday Jason and I went to one of the running stores so I could get some new shoes. Mine previous shoes were 5 months old, but already causing serious feet and knee pain. I was starting to have IT band problems even, and that's an injury I've never dealt with. I had them check my running gait again in case I was starting to pronate (another store suggested I was). They emphatically said, "no." I'm still very much neutral. They didn't have the shoes I previously bought (Brooks Ravenna), so I tried on a few other brands. I fell in love with the Saucony Ride 3. I've never tried Saucony, but am soooo happy that I am not tied to a brand was open to trying these. I was so excited that I wanted to go running right after I got them (but this was during lunch break).

So, this morning I could hardly wait to get out and test the new shoes out. I thought Jason and I would go run together down at the river trails. But he was super stuffy this morning and in no mood for a run. So I set out just a bit later than I had hoped for - meaning the temps were inching higher. But I was so excited to try my new shoes, I didn't care. I was expecting a flying-high kind of run to be totally honest. However, this is not how it went down for me. I underestimated the temperatures and got hot right away. While my shoes and feet felt awesome, I just couldn't seem to hit a stride, a comfortable pace. I felt like I was just totally out of whack. Also, traffic seemed very heavy for some reason, and I had to keep stopping and waiting - definitely throws you off. I almost stopped at 1.5 miles to be honest, but I pushed on. I seriously never felt like I totally hit a groove until 30 minutes into the run. I ended up managing 4.5 miles. The last 15 minutes was definitely the best 15 minutes of the run.

So, while not the best, it certainly wasn't the worst run I've ever had. I'm glad I pushed through. I am super stoked about my shoes too. My feet didn't hurt, my calves and knees didn't hurt. Awesome.

After my run, I did do chest and abs. I really don't recommend doing weights after a run, but sometimes scheduling just doesn't work as you would like (or should I say temperatures don't work as you'd like). For chest I actually tried to use more pushups rather than weighted exercises, just for a change:

I finished with a variety of abs using the stability ball and weights. I was surprisingly shaky after the chest workout. I forgot how effective pushups can be.

Oh, and I must give a shout out to Jessica and Jolene for getting in a 12+ mile run today in preparation for their upcoming first half marathon. You girls rock!


Watching the Hogs
After the workouts, I got myself cleaned up and started making a few things to have out for people to snack on while we watch the game (Razorbacks aka Hogs) - and celebrate Jason's birthday. I made a Spicy Black Bean Hummus, Greek Tofu Dip, and one less than healthy cheese dip.

Directions:
Add all ingredients into food processor and blend until smooth.

The Greek Tofu Dip came from a spice package we purchased somewhere or other (we like to buy things like that). Instead of mixing with mayo and sour cream, I blended with firm silken tofu and kalamata olives. I served the dip with toasted Flatout triangles. 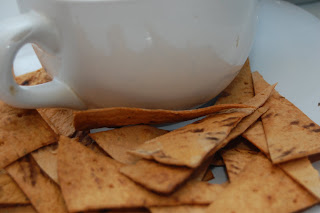 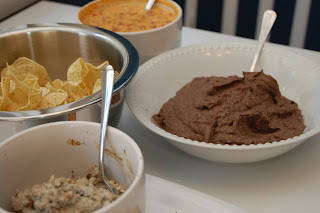 We DVR'd the game and waited until our friends arrived to start watching. That can always be tricky because people like to tweet, post on Facebook, text, and even call with the plays and scores. We managed to finish watching without anyone finding out the final score - not easily done. And...we wonn(sorry Tina). It was close, so there was lots of jumping up and down and F-bombs being dropped before celebratory dancing ;-) I didn't take very many pictures. But I did get the birthday boy and "Dad's with their kids".

Jason has been wanting Mexican food lately. Since it's his birthday, I told him I'd make quesadillas. However, I think we may do something more along the lines of burritos using the leftover Spicy Black Bean Hummus. I'll be sure to post that tomorrow. As for now, signing off. I hope everyone has had a great Saturday!

And Jason wants to thank you all for the birthday wishes from yesterday - and he's also very flattered that everyone thinks he needs to start a blog.