By Heather Iacobacci-Miller October 23, 2010
I must say, I loved reading your Good/Bads. Reminded me of so many more. Love it and I appreciate that you took the time to add to the list.

On Repeat - Running
This morning I had the alarm set early. Why? Last night Jason and I contemplated getting up and doing a race. It's called the Mud Run. Obviously, it entails mud at some point. I am not one to get dirty, but thought it might do me good to get out of my comfort zones. But, when I woke up around 5 am, I started thinking. Uh oh. I really didn't think we should spend the money on the entry fees (would have been $50 without shirts) as we're going out of town next weekend. Also, it would likely mean ruining a pair of shoes. I honestly don't have a spare pair of running shoes that are really safe enough to run 3 miles in and I am not ruining my new pair. Also, um, I'm lazy. I dozed back off fitfully, and at 7:10 when the alarm went off, I turned it off and that was that.

Why even share? I don't really know, just to get it off my chest I suppose. Also, to maybe how how insane I might be. I was too lazy to get up to do a fun run 5K but I ended up running 8 miles. How screwy is that mentality?

So, 8 miles down. Today I actually said, aloud not just in my head, that I was going to run 7 miles. That was the goal. That was what was going to happen. I remembered my water bottled, I was geared up, ready to go. Jason and I started out heading in a different direction on the river trails so I could figure out the true mileage from last week's solo run (I did 7.5 not 7, woohoo!!!!). Then we headed back the direction we typically start out going.

I really felt gread cardiovascular wise. Jason did his job by pacing me down so I didn't just burn out. If it had not been for my hammy issues, I really feel like I could have easily cranked out 2 more miles without any problems. I was in it mentally and mostly physically. Jason, however, wasn't. I really felt bad because he's not been feeling great and I felt like I pushed more than I should have. I had said 7, he was in for 7, but once I was at the point of turning around or going on, I knew I wanted (needed) to go on.

Anyway, it was a really good run for me. I feel really accomplished. I don't know what it is with running recently, but I think I must have gotten my head in it finally. I am not putting up those mental barriers that always prevented me of going farther. I don't doubt myself now, and that's a great feeling. And I almost feel like I'm jinxing myself with these great runs I'm having. I'm waiting for the really really shitty run. Maybe I had enough of those before to sustain me for a while.

Post-Run Chaos
After the run, we headed home. Jason was DVRing the Razorback game. I figured we'd just toss together lunch and he'd watch the game. Well, guess what. Electricity out again. Second Saturday in a row. Nine years and never have electricity out for more than 15-20 minutes then two Saturdays in a row out for over four hours. We decided to head downtown to try a new bar/restaurant that had some veggie friendly options and the game on tv.

Well, they were closed until 4. So now we were working on Plan C and I was getting sick to my stomach needing food in a very bad way (I did have a Pure bar right after the run, but it wasn't sitting well for me at all). The next place we ended up at was a pizza joint (with horrible pizza). Jason ordered a sandwich and I got a salad. Bad service, crappy salad, tired Heather...not fun. Oh, and lightening delays for the game. Seriously, what a day. I finally got to the point where I said I'd take the car home and let Jason stay if he wanted and I'd pick him up later. Long story short, Jason watched the last bit of the game from the car in our driveway. Please note that the car was not running, no driving was taking place. 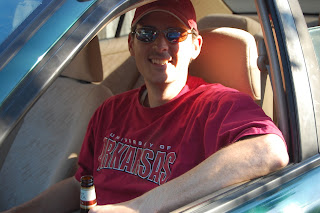 For my running gurus: Backing up to the me feeling crappy part. I've noticed that after my longer runs (7+) I am not hungry at all. If I don't eat, I of course start to feel ill - dizzy, nauseous, etc. But, if I try to eat, the same issues. I've only done 4 runs over 7 miles now so I'm new to this type of recovery. Any suggestions?

Dinner????
As for dinner, not a clue. We're sort of low on some things, but are leaving at the end of next week so a full grocery run won't work. Also, still not filling hungry yet. I am currently sitting on an ice pack trying to relieve some of the pain from my upper ham/low glute area. Is it helping? Not sure, but my ass is frozen.