By Heather Iacobacci-Miller October 03, 2010
Chili for a Chilly Evening
Last night we enjoyed a warm bowl of chili for dinner just as I had said we would. And, as promised, here is the recipe for my Butternut Squash & Black Bean Chili.


Add in remaining ingredients and simmer for approximately 45 minutes to 1 hour or until butternut squash is soft and flavors have melded. 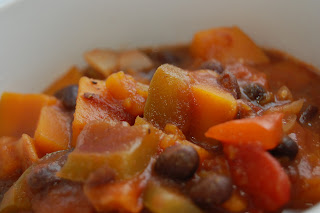 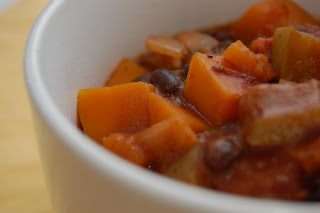 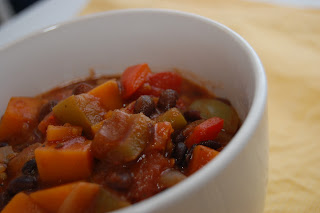 This is so good. The slight sweetness from the squash offsets the heat from the chipotle peppers. It's such a great compliment and the textures are great as well (if you're a texture person).

Sunday Leg Day
Today started off really chilly - only 49 degrees. I had my typical oatmeal to start the day then lazed around putting off the leg workout. I was debating on another run today, but it was really windy out. I had no desire to run in the wind for a second day. So, I finally got off my butt and got in my leg workout. I opted for pyramids for most of the exercises starting with 12 reps, 10 reps, 8 reps then back up to 10 and 12, increasing then decreasing the weights with as little rest time as possible.

I finished off the workout with 2 of the kickboxing combos from Cathe's Kick, Punch, and Crunch and the stability ball abs from that workout. I did make sure to get in a good stretch for the hams as well.

Errands & Another Splurge Meal
After I got cleaned up, I needed to go run a few errands. Jason was going to go ride his bike with some friends. So I took my time with errands for a change. Though, piddling in Target isn't smart because things just end up in the cart sometimes. I did score a sweet deal on some tennis shoes for my niece - paid 5 bucks for a pair of Champion brand that were originally 22. Gotta love deals like that.

I also hit up Old Navy in search of more deals for my niece and nephew. Her birthday is coming up and she needs some new clothes. Clearance items were an additional 50% off. Of course, it was mostly picked over, but I did find her a shirt for 1.50 and a pair of pants for 4 bucks. I also found a shirt for Jason for 3 bucks. My kind of shopping day. I did also have to hit up the grocery store for a few things like bananas, spinach, bell peppers, and the prize for the day...kabocha squash. It was a good day indeed.

Jason got home from his ride around 3:30 and neither of us had eaten lunch. I had my oatmeal before my workout, then a post-workout meal, but it had been 4 hours since I had eaten, and I was getting to be a hungry girl. Jason has been wanting to eat at a pizza joint we both like, but it's kind of a drive for us. Anyway, long story short, we ended up at Razorback Pizza for a super late/super early dinner. I will admit feeling rather guilty for eating out a second time over the weekend. I am trying really hard to not feel bad about it though. It's not something that happens frequently, and sometimes it's nice to not be doing the cooking (or so I'm telling myself).

Do you stress out about eating out or do you enjoy it?

Sorry, the pumpkin pasta dish recipe will have to wait one more day. The past is already made though, so it should be a quick dinner for tomorrow. I'm really looking forward to it actually.