By Heather Iacobacci-Miller October 18, 2010
Stew Sunday
Well, last night I ended up making a new soup recipe. It started off that I was just going to use some leftover acorn squash combined with some kabocha for a creamy squash soup. The kabocha ended up being bad so I had to move along to plan b. Not exactly sure what to call this creation. We'll go with Indian Inspired Fall Bean and Kale Stew.

Directions:
In large soup pot, saute onions, carrots, potatoes, and garlic until begin to soften. Add in spice and beans and continue to cook another 5 minutes. Add in broth and let simmer approximately 20 minutes.

Meanwhile, puree the cashews and water forming a cashew cream the consistency of soy milk or slightly thicker.

*If you don't have a high-powered blender, place the cashews in a spice grinder (aka coffee grinder) and grind until powdered. Then you can add into your blender with water and blend to desired consistency.

**If you don't have one already roasted, cube and add in to the stew at the beginning with the sweet potatoes. Can also replace with butternut or kabocha squash. 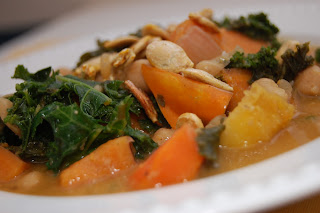 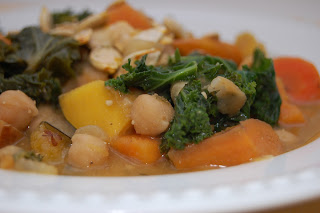 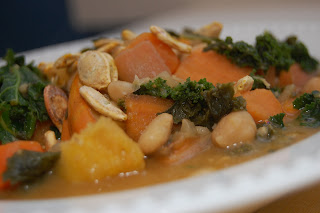 The subtle flavors from the garam masala paired so nicely with the slightly sweet flavors from the sweet potatoes and acorn squash. The kale added a nice texture contrast to the beans as well. This is definitely one to remake.

More Nice Weather Means More Running (and Weights)
Sometimes I think I might get too much sleep. I went to bed at 9 and woke up around 4:15 then went back to sleep again. When 6 am rolled around, I still felt that I could have slept another hour at the very least. I seriously think that if I had gotten up when I first woke up, I would have been less tired. I guess I am saying this because morning workouts just seem impossible right now. The darkness is not helping one bit either.

Anyway, I had planned on doing weights at lunch, but it was just too pretty outside and it's supposed to rain tomorrow, so I opted for a run instead. I will say that it was a bit warmer than I had anticipated (80 degrees with humidity on higher end) and also much windier than I thought before setting out. A light breeze is pleasant, gusting wind in your face is something else. I ended up doing a pretty quick 4-miler. For the most part, it was a great run. The only times I sort of felt like I was starting to struggle was when I was in total sun, no shade in sight, or when running directing into the wind. But overall, not a bad way to spend lunch.

I was sort of torn on doing legs today since I didn't do them yesterday. But I ended up going with shoulders and triceps. I'll likely try to do legs either tomorrow or maybe Thursday. For today's weights, I went with super sets again. I really like super sets because I feel like I keep moving and it seems to go faster. I went with 3x12 today. It's been a while since I've done higher reps, so I thought I'd change it up a bit.

The reason I didn't do a 4th super set is because my left elbow was starting to bother me. Sometimes it feels really weak, like it'll just give out. So I didn't push it.

Made My Monday
When I got home, I found this fun package waiting for me. A box of Doctor Kracker Apple Crisps including a cute "Pug" card. I won this goody package from Kara @ My Wellnest recently. I've only ever sampled Doctor Kracker...well, crackers at Whole Foods and never tried the Apple Crisps. Of course I broke into these immediately after my workout. One word: YUM. Thanks so much Kara, this was perfect for a Monday! 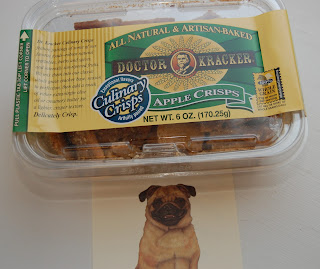 Making Monday Easy
I made an executive decision to make this Monday meal-time easy. That means leftovers. We have too many right now that are about to go to waste otherwise. I am typically not one to choose leftovers...ever. But we have lasagna, chili, stew, hummus, and not telling what else buried in the depths of the fridge (scary). So no new recipe tonight. Tomorrow I have already planned to use one set of leftovers for Taco (Salad Bowl) Tuesday, again trying to make my life easier. What a concept right ;-)