By Heather Iacobacci-Miller October 11, 2010
More Running
So today I had planned on doing chest during lunch then some sort of cardio after work (likely step). But I totally forgot that the dogs had a grooming appointment today and that I'd likely have to pick them up after work. So, plan B - run at lunch instead of weights.

I'll admit this probably isn't the best cardio for me. My legs are fairly sore from the running I did Friday and Saturday then weights yesterday. Sometimes an easy run is just what the doctor ordered though, so I thought I'd go for it. Besides, Jason was itching to wear his new running shorts/shirt and shoes he bought Saturday. Oh, and the idea of running to thaw out was another plus. My office was below 70 degrees. I mean, it's warmer than normal out, but not THAT warm.

Anyway, we had both agreed on an easy run. My legs are sore, he was trying out his new shoes. Oh, and legs sore ;-) However, we ended up doing a rather speedy run. At first I thought that I was just struggling because of sore legs, not realizing that we were holding an 8.11 mile for the first 1.6 miles then sped up to 7.34 for the next 1.47 miles. We finished out with 7.27 for the last .69 miles. Now, I know that's not just race winning speeds or anything, but for me that's pretty good. It also made me feel better because I had thought my speed was on the decline since I have slowed down a bit to make it through longer runs.

So, while we had planned on something easier, it was good that we went with it rather than holding back just "because." Sometimes I think it's easy to take the easier way and just make excuses. If I had run by myself, I probably would have just gone slower and my excuse would have been tired legs. Do you ever push yourself and end up surprised by how much more you were able to do than you were giving yourself credit for?

More Lifting
After work I headed to the vet to pick up the maniacs. They are always so spastic after being groomed. Then I headed back home to finish up my workout for the day with chest. I decided to increase the reps today. For the first super set I did 3x10 and the second one I lowered the weights and went 3x12.

I finished up by stretching the legs before cleaning up and starting dinner.

I bought some red quinoa the other day to try out and thought it'd be perfect for the acorn squash. Also, JL from JL Goes Vegan posted a picture of a white bean sage dish that reminded me of one that I had while in Philadelphia that I had wanted to try to make. Plus, I have two sage plants that are just wild, and I never know when to use sage. Sooooo, I decided to do a mix of flavors for a Quinoa White Bean & Sage Stuffed Acorn Squash.

In large skillet, saute onion, bell pepper, and garlic until soft. Add in the beans, salt, and pepper. Add in splash of white wine and let reduce. Then stir in the quinoa, spinach, sage, and nutmeg and allow to cook until spinach is wilted. Note, I only added just a small amount of wine to further soften the beans, onions, and bell peppers. This was not runny by any means.

While the bean mixture is cooking, microwave the squash approximately 5 minutes (this makes them easier to cut). Half them and scoop out the seeds. Place in a casserole dish, flesh side up. Fill them with the bean mixture.

Tent them with aluminum foil and bake 15 minutes then remove foil and continue to bake until squash is cooked through.

Cooking notes:
Not sure the tenting is necessary. I was afraid of the filling getting too done.  I did end up re-tenting and adding in some water to help steam so next time, I plan on adding in water from the beginning

The recipe for the filling easily made enough for 4 small halves, but I only cooked 3 halves and cubed and roasted up the 4th. 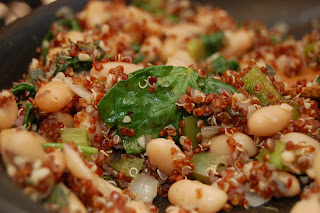 While this was baking, Jason came home and was asking me if there was anything else that went with it, like a sauce. Well, um, no. But I did have 1 of the halves of the squash that I had cubed and roasted rather than stuffing all four halves. So, a sauce was born: Acorn Squash & Cranberry Sauce.

Directions:
In food processor, puree all ingredients until smooth adding in the almond milk until desired consistency is reached. 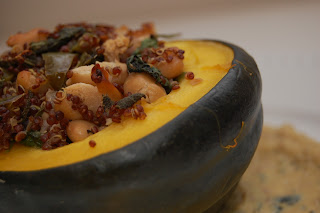 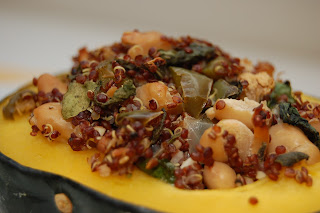 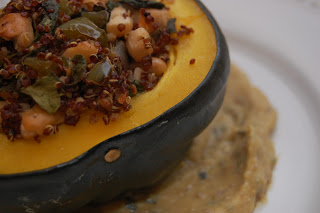 This turned out so well. I was really pleased. I had thought that some crumbled tempeh bacon would have been a nice touch in the filling, and the next time I make this I will add that. I think the salty/smoky flavor would be a nice touch. Another option might be adding in a splash of liquid smoke. The sauce was slightly sweet from the cranberries, but it was a great compliment to the savory flavors in the filling. My only complaint - I couldn't stuff in enough of the filling ;-)