By Heather Iacobacci-Miller October 21, 2010
Taking Advantage of Weather by Running
So today I opted for another run at lunch. I was torn between taking today or tomorrow as my rest day. Since I felt fine and the weather is still so nice, I opted for the run. I was planning on a shorter, 3-mile run. But I ended up doing 4.

It was another really great run, though I will admit to the upper hamstring/low glute issues still flaring up. Butt (teehee, couldn't resist) other than that, it was really pleasant. I don't know if it's my newer approach to running, the weather, or everything just clicking, but I am enjoying running like I never thought I would. It seriously was more of just a means to an end - it was exercise, cardio. It got the job done when I was sick and tired of another step workout. But I have discovered it to be so much more once I took a step back.

Of course, I thought through much of this today. I was so lost in my thoughts that at one point I looked up and couldn't believe how far along I already was. It used to be that I watched every second tick away. Anyway, I'll share my musings tomorrow along with the fun facts I came up with yesterday.

Wraps Take II
I had intended on doing chest and abs after work. But when I got home, I just realized I was done. Period. That was it. So I did myself a favor, listened to my body, and opted for a nice hot shower and PJs. While tomorrow is supposed to be my rest day, I may do chest and abs at lunch depending on how I feel.

I had planned on making a Thai curry dish for dinner I pulled out the tofu, started cubing it up. Then I realized I was out of curry paste. I swear it's been on the list for ages now. So I had to rethink dinner. Since I had the tofu out already, I decided to do an easy marinade of agave, OJ, balsamic and apple cider vinegars. I had some sundried tomato chipotle hummus leftover (bought for football at friends' house), so I thought I'd do another evening of wraps for dinner.

For the side, I made an Apple Cranberry Quinoa using red quinoa this time. I typically make this as a wheat berry salad, but I really didn't feel like waiting an hour or so for those to cook. I did end up adding in some OJ and parsley to the original ingredients. This is such a great side dish. I think I would like to try it with roasted butternut squash the next time to add a hint of fall to it. 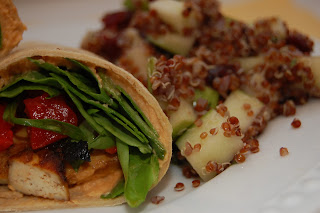 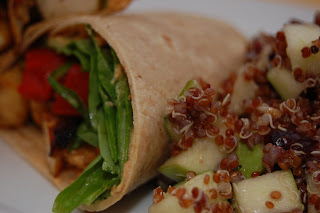 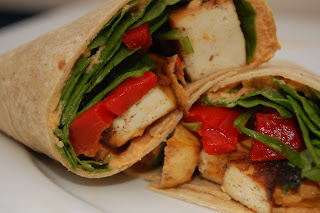 For the wraps, I just filled them with the hummus, spinach, roasted red bell peppers, and the tofu. Super simple. I think I'm learning to like these easier meals. Hope you guys don't end up bored!