By Heather Iacobacci-Miller October 02, 2010
Saturday Run
Thanks for sharing your favorite pizza types and toppings. I wish we could all get together for Pizza Friday and have a build your own pizza buffet. Wouldn't that be fun?!

Usually Saturdays end up being chest days for me. It sort of happened that way because I knew Jason would be around to spot me with the heavier weights. But today I decided to do away with the norm. Instead, I actually sat on the couch and watched some Food Network before even thinking about working out, chores, anything. It was nice easing into the day and something I should do more often. Now if I could just figure out how to sleep in too.

So, doing away with tradition, I didn't do weights at all today. Jason and I went for a run along the river trails on the north side today. We started off and realized quickly that it was warmer than we had anticipated and it was super windy. I had no clue it was that windy when we left the house. So the first 2 miles were straight into the wind. Tough. But we actually pushed hard and ended up holding a pretty good pace considering the wind conditions.

I felt pretty good, loving my new shoes still, but just before mile 3.5 I had a sudden, searing side stitch. It literally stopped me in my tracks. Usually side stitches sort of slowly come on and I can slow my pace, adjust my breathing, and they go away. Not this one. I don't know that I've ever had one so painful. I was pissed off that I had to stop too. It made me feel like I was failing somehow (which I know is silly and not true of course). After about a minute of walking, pacing really, it was gone and I was ready to make up for it. I was determined...period. I kicked out another 1.5 miles for a nice, solid 5-mile run. It felt really good to conquer the run. I didn't let it beat me ;-)

My left hamstring (or sciatic nerve) did bother me today for the majority of the run. But, my hip flexors never tightened up, so that was good. Overall, it was a really good run for me. I will say that I felt terribly nauseous afterward on the ride home. Any of you runners out there ever had that happened? I didn't want to eat anything at all, but I knew I needed to refuel. But the thought made me ill.

Celebrating Fall
After we got cleaned up, we headed to a local neighborhood festival called HarvestFest. It's great neighborhood (Hillcrest) fairly close to ours. We had actually looked at several home in that area before buying our home. We also have many friends living in that location too. I went to grab my camera and realized I had left it on the table. Blogger Fail. So, I'll just have to try to describe it and you can picture it ;-)

We still had not eaten lunch yet, so we decided to stop at a restaurant we enjoy called Canon Grill. They have a few vegetarian items to choose from, which is a big plus for me. I did just end up going for the veggie burger today though because I still wasn't feeling hungry, even though I should have been starved. They do have a great veggie quesadilla that has more veggies than cheese, very rare, and veggie fajitas too. Oh, and today, they had happy hour all day so I scored a Blue Moon for 2 bucks!

As for the festival itself, they block off part of the street and vendor are set up - mostly jewelry, soaps, candles, things like that. They did have one stage with a band. I was so excited to find a really cool necklace. The beads are porcelain and it was only $25. I think that's a pretty good deal for handmade when stores like The Limited charge that and more for mass-produced jewelry. We also picked up presents for the pupsters - new Razorback dog collars. They're very happy of course. 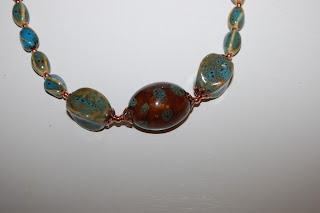 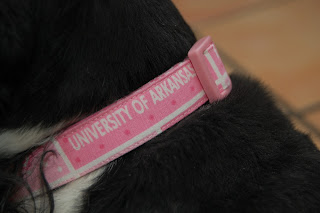 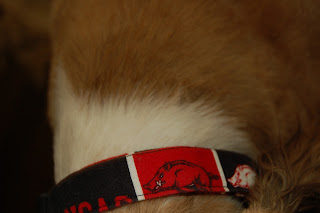 We ran into several friends, which was a lot of fun. So perfect weather, great run (overall), jewelry score, time with friends, time with hubby all add up to one great day. To cap off the day, I plan on making Butternut Squash & Black Bean Chili for dinner tonight. The temps are steadily dropping already (supposed to get down to 49 tonight with high of 70 tomorrow), so I think that will be the perfect harvestfest type of meal. I will post pictures and the recipe tomorrow.