By Heather Iacobacci-Miller October 28, 2010
Rest Day
Well, as much as I had hoped and planned on getting in cardio this morning, I had to be honest with myself. It just wasn't going to happen. Period. My body is pooped. I really didn't want to have to take today as a rest knowing how long I would be sitting (7-2 at work then the rest of the time at airports or on a plane). But there was just no way my body was going to cooperate with my OCD mind. I did finally rationalize that I could get in a run tomorrow on the waterfront. I mean I'll take that!

So last night, after tons of rearranging, we managed to pack everything into two carry-on bags. I have a huge purse to carry other items like the laptop and such and Jason had a bag that he could carry as well.

Fretting, Planning, Worrying Does Not Equal Control
I spent most of my morning at working trying really really hard not to think about the pending flight.
The only problem was having my parent calling me and chatting it up about flying. They both love it. I don't even want to acknowledge it!
I had a meeting at 11 then another at 1 so I knew that'd definitely keep me occupied. We were supposed to fly out at 3:24 CST and are due to arrive (after a layover in Houston) in Seattle at 7:55 pm PST. When I got back to my desk after the 11 am meeting, Jason had sent me an email to call him and a brief message why. Really bad news. Our friend's father may not make it, and he had to fly out immediately to get to the hospital. So, our trip is postponed.

Of course they told us we could still fly out and stay at their house and use their vehicles. But it just wouldn't be the same. Everyone was dissappointed of course. It was out of all of our hands really.So now our thoughts are just with our friends and their family.

So after the cramming in of workouts, fretting about eating dinner tonight (no time at layover, so it would have had to have been after we arrived in Seattle), stressing about packing and flying, no trip. It goes to show that no matter how well you plan or how much worrying you do, some things are simply out of our control. This really needs to be a lesson learned for me.

Looking on the Bright Side
I guess the one good thing is that my sister is still planning to come up and stay with us tomorrow evening. It's been a while since she's been over, so I imagine we'll have a good time (we always do). She recently found out she has some serious gallbladder problems and one recommendation was to go gluten-free. So I am thinking of trying to make a gluten-free pizza just for her.

So any recommendations from my gluten-free friends????

I did go ahead and choose to be off work tomorrow (I mean, I had it in my head I wouldn't be there after all). I'll have to hit the grocery store now since we wiped out the fridge. I'll probably check out some more gluten-free goodies for my sister too. It's always fun checking out new foods. It's supposed to be a really pretty day, so I may try to go for a run as well.

Chili for a Chilly Evening
The temperatures here really dropped off today. I don't think the high hit 70 and we're due for a possible freeze tonight. We're a bit low on food right now but we did have a bell pepper, white onions, and an aneheim pepper. So we decided to try our hand at a Spicy White Chili tonight. I have to say "we" because the white chili was Jason's idea after watching the FoodNetwork the other day.


Directions:
In large sauce pot, saute onions, peppers, and garlic until begins to soften. Add in the stock, beans, and spices. Let simmer for about 30 minutes then add in your "chicken" and let continue to cook and thicken.


*Recommend adding less liquid if you don't want to do a slurry. 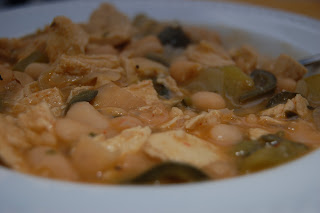 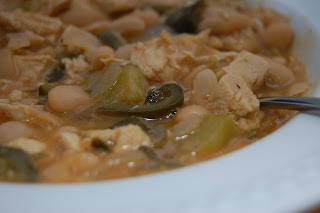 This was a really great alternative to the regular red chili. We'll definitely make this one again!

Commenting
It's been brought to my attention that some of you are receiving mass amounts of notices of replies from ages ago. My guess is that whatever went wrong with Intense Debate in terms of my replies suddenly not showing up was randomly fixed. So, now my replies are showing up, and everyone is being notified. Gotta love it (or not). So I do apologize. I don't know if there is any way to fix this. Hopefully it is just a one-time thing.