By Heather Iacobacci-Miller October 30, 2010
Friday Recap
Since I was off work Friday I decided to take advantage of the time and the gorgeous day to get my run in at the river trails. It was a cool day here with a steady wind, but so pretty and crisp out. I did wait until about 11:30 trying to let it warm up a bit. I will say I need to work on taking off my running jacked and tying it around my waist and not dislodging my iPod arm band and with a water bottle in hand. I was flailing around let's just say that. Oh, and seriously have issues drinking water when I'm running. I feel like I'm choking or I splash it all over my face. Yesterday I started coughing and spit it all out straight down my shirt. Thankfully, no one was around ;-)

Pizza Friday
My sister got here just before 5 pm and we decided to try The Flying Saucer Draught Emporium. They literally have hundreds of beers available so we figured they'd have to have a gluten-free beer on the menu. And they did. It was also a different brand (Bard's) than the one I had bought for her (Redbridge).

We got home around 7 and Pizza Friday was underway. I made one regular whole-wheat dough for us then a gluten-free for Sarah. I got a few suggestions from my readers, but Jason had picked up a gluten-free Bisquick mix that had a recipe for a pizza dough so we used that. It called for two eggs, but I used the flax egg instead. She did add some seasonings to the mix as well. 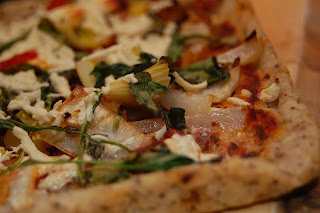 Verdict? Really quite tasty. I think I would suggest pre-baking the crust for just a few minutes before adding the toppings. But she was on happy camper to have both beer AND pizza!

Good Day for a Hike
Today we woke up to a chilly  37 degree morning. We decided to get some errands run before trying to get out for a run. Sarah wanted to pick up a few gluten-free items from the Drug Emporium and Whole Foods and Jason wanted to make a stop by the bike shop.

Sarah decided she would rather hike Pinnacle Mountain than go for a run as she was worried she would just be stuck alone because she isn't up to higher mileage yet. So we packed up a quick, easy lunch. She had picked up some rice tortilla wraps, so I made a super quick hummus for wraps to eat at the top of the mountain (on the second trip up). Yep, we hiked up, down, up and down again. It was a gorgeous day for it. While it was really windy (which would have sucked for a run) it was great when you made it to the top of a mountain. 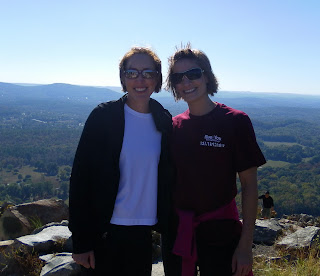 Tonight I am going to make a Chipotle Tempeh Chili for us. It's supposed to get rather cool again. Even better since our heat downstairs went out and the repair guy didn't show up yesterday. So chili will really be ideal. I've not ever make one with tempeh, but tempeh is gluten-free, so we're giving it a shot. I will post the recipe tomorrow and let you know how it turns out. For now, I'm going to log off and spend some more time with my sis and enjoy the fact that she's staying all weekend!