By Heather Iacobacci-Miller October 12, 2010
Walking, Running, Donating for a Cure
While this month is all about Breast Cancer Awareness, I'm actually going to ask that you think about supporting another cause: Pancreatic Cancer. I have a very dear friend who's husband (Tommy) was diagnosed with pancreatic cancer last year just after their one year wedding anniversary. 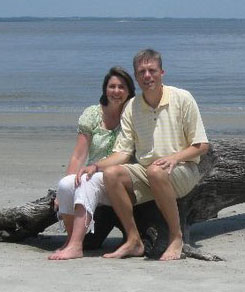 There is 5K walk/run event in Atlanta on November 13 - PurpleStride. While I cannot attend, I will be donating to "Team Tommy." For my friends in the Atlanta area, if you could participate in this race, it would mean the world to me. But what I would like most is that you please make some sort of donation if you are financially able. This link takes you to Lindsey's page for the Pancreatic Cancer Action Network - Purple Stride Atlanta 2010. Also, it looks like there are PurpleStride events around the country, so maybe there is one in your area.

Workouts - Weights & Run
During lunch I decided to do shoulders and triceps. I did super sets for all but the last exercise where my triceps (elbow really) were just too tired. For the first super set, I did 3x8. For the rest, I lowered the weights and did 3x10.

The reason for the 3x8 on the first super set was because I had thought I could maintain the current wait and add on 2 reps. Well, I couldn't, not with safe form. So I opted to keep the weights and lower the reps instead. I can't seem to break through a weight plateau for those 2 exercises actually. Increasing the weight even .5 lb seems tough.

I wasn't sure what I wanted to do after work. Jason and I had talked about meeting up with a running group that does a 4-mile run on Tuesday evenings. But this is his week to be slammed at work. We had thunderstorms roll through, so I thought I'd end up doing a short step workout. But, by the time I left work, the sun was out and the front had brought in cooler temps. So, I decided to get a 4-miler done anyway. It was a great run except for the many minutes spent stopping and waiting on traffic. Really started to just tick me off. So, note to self: don't run at 4:45 pm on a weekday.

Tamale Tuesday
I ended up not getting completely cleaned up until right about 6 pm, about the same time Jason got home. I had thought about a soup, but at 6 pm, I wanted some super fast. I am out of veggie patties right now, but I did have some White Mountain Vegan Tamales. So, tonight is Tamale Tuesday. I did have some barley on hand that I made the other day. So I made a Black Bean & Tomato Barley.

Directions:
In large pot, saute onions, peppers, and garlic until soft. Add in the remaining ingredients and let simmer for about 5 minutes. 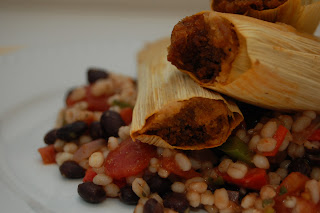 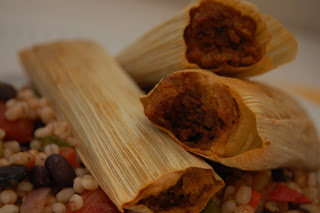 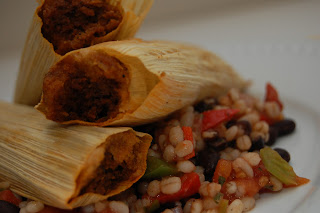 This was a great, fast dinner ready in about 15 minutes. The only thing I goofed on was adding too much barley to the bean mix. I have a tendency to go over board adding ingredients. One day I'm going to get around to making my own tamales...