Today I Ran for You - Komen Race for the Cure

By Heather Iacobacci-Miller October 16, 2010
This morning I woke up at 5:30 am, though the alarm was set for 6:30. I decided to stay in bed and at least doze for another hour. I got up and started getting myself ready for the race. Pinning on my bib, putting the chip onto my shoe, breaking the flimsy zip tie. I really didn't want to eat much, so I just had half a banana with some peanut butter and tons more water. Then it was off to the race.

The Arkansas Komen race is the 3rd largest in the country. It's so hard to believe that Arkansas has one of the largest. There were over 45,000 women registered. This year the runners actually started 10 minutes early to help relieve some of the crazy pushing surge that happens. Usually as I'm crossing the second bridge, I can look over and see a sea of women crossing the first. It's an awesome sight that is so hard to put into words. Very emotional. 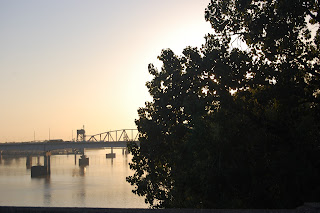 It was about 50 degrees at the start of the race with the sun just coming up. But all the bodies and energy kept me warm. I got off to a speedy start. It's easy to do being caught up in the emotional surge. I hit mile one at 7:15 and maintained that, despite the huge bridge, up to mile 2. I was so excited when I realized I had hit mile 2 at 15:30 (see the thumbs up even). 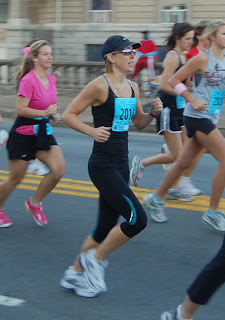 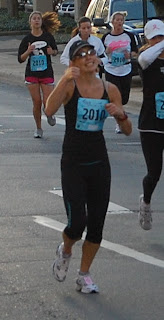 But that's where I lost it. I felt fine really, but that is the start of the super long incline that just kicks my butt. I slowed my pace so I could make it up the hill. Apparently I slowed too much, once again. I won't know my exact time until tomorrow because I missed the clock as I crossed, but it was somewhere around 24:30. Drats.

I was so pumped thinking I could hit 24 today. Maybe part of it is the cold, the hills, then just psyching myself out. Not sure. I did really just try to enjoy the race for what it meant though. It's such an awesome experience to run a race with that many women - men are not allowed to run this one. So over 45,000 women coming together for one reason is pretty freaking spectacular if you ask me.

Like I mentioned yesterday, today is a busy one. I think Jason and I are going to go do an easy 2-mile run. I say "think" because he's finishing breakfast as I type this up. He also thinks I've lost my mind wanting to run some more. But we just won't go there ;-)

Run or no run, we'll get cleaned up then head to my niece's party an hour away. Then we'll come right back and go directly to our friends' house to watch the football game. I probably won't see home again until about 6 pm. I have not a clue what we'll even do for dinner - chili sounds appropriate at the moment, but it's supposed to hit 84 so that may seem less appropriate later. So I thought I'd just do today's post mostly about the race rather than game watching or birthday parties. This race is far more important than anything else I will do today.


So to all of my readers who have been affected by breast cancer in some way, today I ran for you.