Another Soup Kind of Day

By Heather Iacobacci-Miller November 30, 2010
Apologies
First off, I want to thank everyone for their kind words of support and encouragement regarding my knee. So many of you know first hand what I'm going through. Now, I must apologize for being such a whiny brat. I was being very self-centered yesterday. I know I am not the only person in the world who has ever had a side-lining injury. Some of you have gone through far worse; some of you are still recovering. So I apologize.

Weights & Boxing
Today was a cold one, but at least the sun came out. That helps some. I had wanted to go home at lunch at get biceps and abs done, but I forgot I had a birthday lunch (mine with another co-worker). It was a stressful morning, just the kind of morning that pretty much demands a mid-day workout. Sigh.

I followed the weights with MMA Boxing then abs from Power Hour. After my workout, I did sit and try to do additional stretching for the IT band. I iced my knee and used one of my rolling pins to roll out the muscle ;-) A foam roller is on my Christmas "need" list now.

More Soup
It was really chilly here today. The highs were low 40's, but the wind chill kept it in the 30's. What does that mean? Another soup day for us. Jason was really helpful to get the soup going after I told him my idea on what I had wanted to make - a Moroccan Lentil & Chickpea Stew.


Directions:
In large soup pot, saute onions, garlic, bell pepper, and sweet potatoes with spices until onions begin to soften. Add in bouillon, water, and tomatoes. Let simmer for approximately 20 minutes then add in the lentils and chickpeas. Continue to cook until lentils are tender, approximately 15-20 minutes. 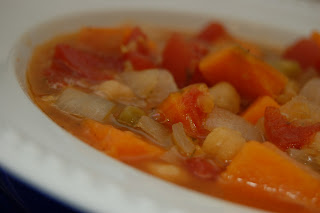 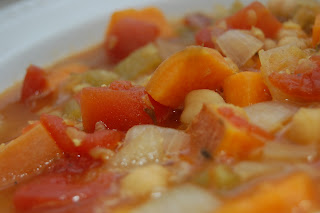 I can't even tell you how good this smelled as it was cooking. You could smell the subtle, warm hints from the garam masala (I think it should be a candle fragrance) combined with all the other spices. It just smelled warm and cozy.

This was perfect for a cold night. I will say that we could have added in more lentils as red lentils don't soak up as much liquid as say brown lentils. Also, tomato paste would help thicken this if you would prefer a thicker stew.