By Heather Iacobacci-Miller November 25, 2010
This morning I woke up just a little after 7 and realized that it wasn't raining out (yet). Even better, it was 70 degrees. Oh yes, this meant I was going to get to run today after all. I waited for Jason to get up and we headed out around 8:45. It was a bit windy out, but no rain. I was happy that I didn't have to bundle up as well. Right at 2 miles into the run (just as we passed our house), it started to sprinkle a bit and Jason had to make a pit stop. I opted to keep running. The rain actually felt pretty good I learned this summer that it can be fun running in the rain.

The rain would stop and start back up, but it was nothing to deterring, so I decided to take a turn heading one route that would put my mileage close to 6. I actually saw 3 other groups of people walking or running so I didn't feel too terribly nuts for being out in the rain. But then the sky fell out when I was about a mile from the house. Oh yes, downpour to the point where I could barely see. I took an immediate turn to try to get back to the house as quickly as possible. The rain was coming down in buckets and the streets were starting to flood. There was no avoiding running though puddles. At one point I just started laughing out loud because it was just too comical to me. I even had cars honking at me. When I finally got home, I had to pour water fro my shoes and wring out my clothes.

I am thankful for a sense of humor.

While I got cleaned up (dried off) Jason made the sauteed green beans side dish. We got everything packed up and out the door just before the true storm hit, and it hit hard. At one point we were only able to do about 30 mph on the interstate because you simply could not see a thing. The wind was completely sideways, gusting up to 60 mph according to the radio broadcast. It definitely took us longer to get to Jason's parents' home than expected.

I am thankful that we made it safely.

I didn't eat at the in-laws' house. Jason made himself two small plates. I swear he has hollow legs and could eat all day. We were able to visit with the family for a little over an hour before we had to get re-packed and head to my dad's house.


I am thankful that our families are centrally located and we were able to all be together.

Apologies in advance for the missing food photos. I just failed on that today. I was trying to stay out of the way for the most part and busy taking pictures of the family as well. Anyway, Dad made spaghetti, as is typical for our Thanksgiving meals. As I mentioned yesterday, I brought wheat-rolls and a loaf of gluten-free bread for my sister. I forgot to take a picture, but that's for the best. While the bread tasted really good, it was not nearly as pretty as Sarena's bread. I also brought the green beans and a vegan (and gluten-free) crustless pumpkin pie using a fantastic recipe from Happy Herbivore that I slightly altered to make gluten free. I made an easy sweetened cashew cream to top it with (sweetened with maple syrup). 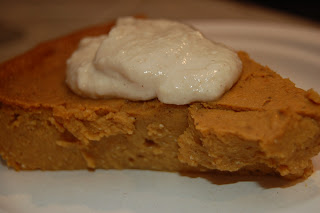 The pie was really tasty. Not the prettiest picture, but it was a paper plate after all. This is definitely one I want to make again. Anyone who likes to eat the filling out of the pie, this one is for you.

I am thankful for great food and inspiration from great food bloggers.

As I mentioned, I tried to get pictures of the family, mostly of shenanigans taking place. That's always par for the course with my sister's kiddos when they're with they're Papa, Grandma (my step-mother) and Mims (my mom).

I am thankful that my parents can all be together despite divorce.