Good Reasons for a Rest Day on Monday

By Heather Iacobacci-Miller November 15, 2010
Well today I had planned on doing shoulders and triceps and likely a step workout after work. My sinuses are a mess though and my legs are just heavy from the runs this weekend. So I decided to take today as my rest day. I just wasn't up for anything to be honest.

I think it was a smart decision for the fact that tomorrow's cardio will likely have to be indoors because of weather. I know that two days of step would be difficult for me to swallow. Also, I needed to hit Target at some point so the rest day lets me run that errand without feeling rushed, so things work out sometimes for the best.

I've been seeing a few posts for recipes and dishes using delicata squash. I am a huge squash fan, but I had yet to try this one out. So the other day I picked one up just to try it out. I wasn't exactly sure how I was even going to use it to be honest. I figured I could roast it up and serve on a salad if nothing else.

What I decided to do, since I had the extra time today, was to stuff it and serve it as a side dish to roasted potatoes and Quorn patties with a mushroom sauce.

Cut squash lengthwise and scoop out seeds. Place flesh down on baking sheet and cook approximately 20 minutes, then remove from oven.

In large non-stick skillet, saute onion, garlic, and cranberries until soft. Add in spinach and seasonings and allow spinach to begin to wilt. Stir in quinoa and lentils. Re-season if needed.

Fill the squash with the quinoa mixture. Optional topping ideas: bread crumbs, goat cheese, or toasted pumpkin/squash seeds that have been coarsely ground.

Place back into the oven and cook until squash is completely done, approximately 20 minutes.

Directions:
In non-stick skillet, saute onions, garlic, and mushrooms in wine or broth. Cook until mushrooms and onions become soft before adding in the seasonings. Slowly stir in the slurry to help thicken the sauce. 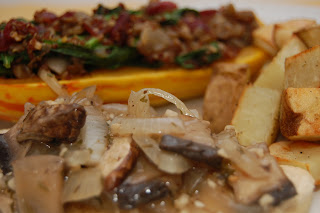 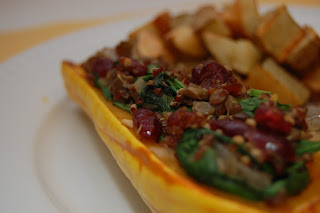 I think Jason was happier with this than I was. I think that the squash itself needed something - maybe just a small amount of salt, pepper, and perhaps nutmeg in the initial cooking stage. I also should have cooked the quinoa in broth I believe. Don't get me wrong, this was good, but it just seemed to be lacking a little something. Maybe some acid from apple cider vinegar.