By Heather Iacobacci-Miller November 10, 2010
Thank You
First off, I wanted to thank everyone for your unbelievably kind words of support and condolence regarding yesterday's post about Tommy. Those thoughts and prayers should really all go to Lindsey, his family, and his friends. Right now my friend is going through a loss I cannot even begin to fathom. Hugs to all.

Why I Was Afraid of Group Runs
Last night we did indeed to meet up with the running group for a nighttime run. I was clad in my new Brooks Nightlife gear (bright yellow) so I would be seen. Now if only I had headlights on my shoes to see the ground. It was really unnerving running and not being able to see the ground...at all. The route stars on a very well-lit, busy street, but quickly you head into a neighborhood that apparently does not believe in street lights.

Jason and I were in the front with the store's owner (aka uber runner/marathoner/triathlete), 2 other women and another man. We were going at a pretty fast clip especially considering the dark and the major hills. I started to lag behind a bit with one of the women, but she ended up breaking off for a shorter route. So I was left bringing up the rear alone. I was too slow for the front group (which included Jason) but way too fast for the other groups, which I have no clue how far back they were. That meant I either ran completely alone or pushed hard to stick with the group. I pushed hard. I will say that this is why I was afraid of running with a group though. I don't know the route or neighborhood well enough to feel comfortable breaking off entirely, especially not in the dark.

It got worse though, the other girl broke off at the 4-mile mark. I told Jason I was fine going another mile, but I had to slow down. So we kept going with the other 2 men. Well, Jason kept going. He didn't slow down and they just kept getting farther and farther ahead. I kept getting more and more pissed off too. Thankfully this was back at the beginning of the route, the well-lit portion. I finally got to the corner to turn into the dark neighborhood and said "fuck it" (literally as in out loud like a loon) and turned around running back towards the store cursing Jason and everything all at once.

What I didn't know was that Jason had stopped at the bottom of a hill to wait - but how could I know? Anyway, he apparently turned around to try to catch me, but I was pissed and running even harder. I must say that this run felt more difficult than the 10 mile run on Sunday if that's even possible.

I think I did just over 5 miles in just under 42:45 minutes, which is pretty good considering the conditions (hills, no light, being ticked off). So the positive thing was pushing myself past all comfort zones. It did help me forget about the day's sad news. But at the same time I had this notion that it'd be a great run side-by-side with my husband who understood my need to be close after such news. Oh another positive, leftover soup!

Running
I guess the run wore me out. I was asleep just after 9 pm and slept right up until my alarm woke me up (only getting up twice in the night). I seriously think I could have slept another hour with no problem. I had planned on doing chest at lunch then hitting the river trail for a 5.5 mile run after work. However, I mentioned something about running at lunch, as in I didn't know if he was planning any exercise for the day, and he said if he didn't go at lunch, he probably wouldn't do anything.

So...we set out for a 4-miler at lunch. I had anticipated (in my mind) an easier run today after last night's run. It was also almost 80 degrees out so going fast and hard didn't sound appealing. But, that's just what we ended up doing. I have no freaking clue how I pulled this one off how I was feeling, but we did 4 miles in 32:14. When I want to go fast, I can't seem to, and when I want to go slower, I can't seem to do that either. I feel like I have no consistency.

Lifting
After work I thought I was going to do my chest workout. I had it written out, the bench set up, all set. Once I finished my warmup, however, I went straight for legs. I had to admit that another day of upper body wasn't smart. My shoulders are sore, my triceps are sore, my biceps are sore. That would all add up to a bad chest workout. So legs was the compromise. I'm really glad I made the switch. I had a good leg workout that flew by. I did a similar workout as last week going with 2 giant sets that included 3 weighted exercises and 1 plyo exercise. Exercises were done 3x10 unless noted.

I got in a good stretch after the workout. Shaky legs! Oh and I think going up and down the stairs with loads of laundry counts as a third workout for the day...

Sweet and Savory
This morning I started pressing tofu for dinner. I wasn't sure how I was going to use it exactly, but I thought I'd get a head start on it. Jason had the leftover Spicy Thai Curry "Chicken" Bowl for lunch so he wasn't really up for stir fry.

I ended up doing a quick marinade: orange juice, balsamic vinegar, agave, salt and pepper. I let that marinate in the fridge while I did my leg workout and got cleaned up. I tossed it in some panko for crunch (or that was the hope) and baked it in the oven along with both sweet and russet potatoes that I seasoned with rosemary, basil, oregano, garlic, salt, and pepper.

I had a bunch of kale that I thought would be another great side. I sauteed that with white onions, chickpeas, and the leftover tofu marinade. I love the sweeter flavors of orange juice and agave with kale. 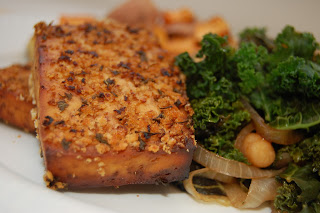 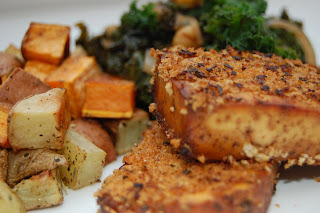 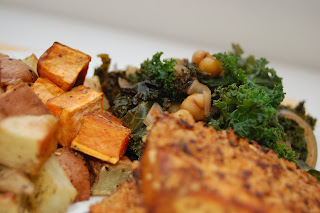 This felt like a nice fall meal. I liked that the tofu got slightly crunchy from the panko. I do wish I had let it marinate a bit longer though.