By Heather Iacobacci-Miller November 08, 2010
Soup Sunday
I ended up making a vegetable soup to go with the freshly baked wheat French bread. You just can't pass up fresh bread. I wasn't sure what direction to go with the soup but it ended up being a Vegetable "Chicken" Soup.

Directions:
In large soup pot, saute onion, peppers, carrots, sweet potato, and garlic until begins to soften. Add in remaining ingredients up to the zucchini.

Let simmer for about 25 minutes then stir in zucchini, squash, and your "chicken" substitute. Continue to cook until your zucchini and squash are done, about 15 minutes. 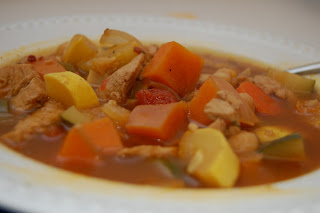 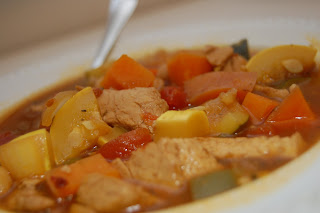 Perfect Picnic Weather
This morning I felt like I was running late waking up to sunlight! It was so nice walking to the office with light though - and not the street lamp variety. It was really chilly again though (37 degrees), but it's supposed to warm up to the low 70's. 30 degree temperature changes during the day make it so difficult to dress properly for the weather. Though, I won't complain about the warmer temps or the sunshine.

I had an eye appointment today, so I was leaving work early. No lunchtime workout today. But we did something even better. We packed up a picnic lunch and the dogs and went to one of the local dog parks. We really must do this more often with the pups. I will admit to being a bit of a worrier though because you just never know what another dog might do. I've seen plenty of dog fights happen at the park. But all was well today. Heath wanted to try and play, but he was a bit nervous. We thought he'd take off like a rocket, but it was more like a fast-paced prance. They never strayed too far from us. Of course, when we broke out the food, Maddie didn't stray at all. 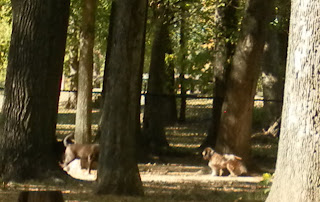 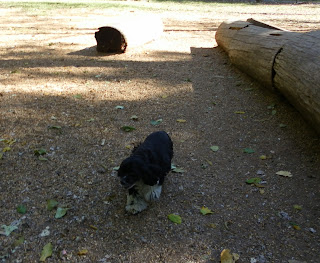 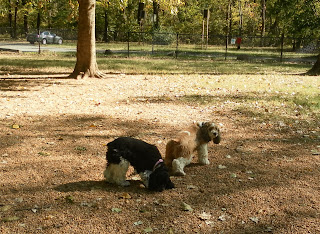 Lifting & Boxing
After the picnic and dog park time, I high tailed it to the eye appointment. My eyes were definitely getting worse. It was way past time for a check up. Thankfully it didn't take too long. I got home all ready to get in my workouts to realize the battery in my heart rate monitor decided to crap out on me. I thought Jason had ordered spares, but only for his apparently. So I had to toss on some cover up clothes and hit the local hardware store. Love this little store because everyone there is beyond helpful. They even changed the battery for me. Gotta love that.

So, got home and started up the workout session again. I went with shoulders and triceps today. I did them as supersets:

I followed up the weights with cardio - Cathe's MMA Boxing. As much as I would have liked to have gone for a run to take advantage of this weather, I knew it wouldn't be good for me. My legs are definitely tighter today, so I needed a lower intensity cardio. I also got in a good stretch.

Mushroom Monday
We had some shiitake mushrooms that Jason had picked up at our local market that needed to be used pretty quickly.  I thought he had a solid idea of how he wanted to use them but basically it was just some sort of Asian style soup or noodle/rice bowl. He said he'd take care of it, but got home close to 6, by which time I was hungry and getting irritable. I sort of took over based on what he was already starting to pull out of the fridge. We had some rice that I pre-made and froze so we went that direction for a Spicy Thai Curry "Chicken" Bowl.

Directions:
In large soup pot, saute onions then stir in frozen veggies, eggplant, garlic, and Quorn. Allow to cook until frozen items begin to thaw. Stir in coconut milk, water, bullion cube, and spices. Allow to simmer for approximately 15 minutes then stir in snap peas and shiitake mushrooms. Allow to continue to cook and thicken stirring in the green onions at the very end.

Serve over rice or with udon or soba noodles. 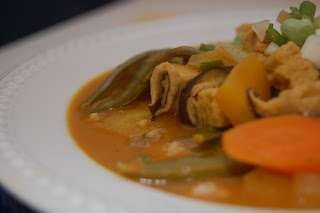 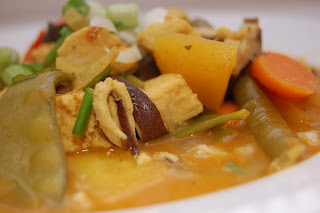 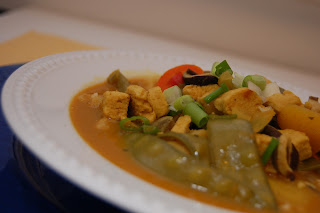 This really turned out well. Jason and I work well together in the kitchen sometimes. It can be fun coming up with a dish out of two different set of ideas. I will say that a squirt of lime juice would have brightened the flavors a bit more. We were just out of limes. Also, the next time I might do 1 1/2 cans of the coconut milk and a little less broth, just for a thicker, richer flavor.