By Heather Iacobacci-Miller November 16, 2010
Two on Tuesday
Today started off as a rainy, dreary day here. The temps were below 50 and it was windy as well. Makes it hard to get motivated that's for sure. I knew I wouldn't be doing the group run tonight, so that meant either step or some sort of boxing/kickboxing. I obviously did not get up early to work out though.

At lunch I did shoulders and triceps.

It was a pretty good workout despite the fact that my heart rate monitor is pissing me off. Sometimes it won't register a heart rate at all. I changed the battery in the transmitter last week and am still having issues. At one point during my run on Sunday it said my HR was 192. Um, no. I've maxed out at 186 before and I know how that feels. So I don't know what's going on.

After work I had planned on Cathe's Step Blast then the abs from that same disc. But when I left work, the sun was out and it had warmed up a bit (53 degrees). I just couldn't stand the idea of an inside workout today, and I need to get myself slowly acclimated to the lowering temps, rather than just wait until it's all of the sudden 40 (which is what seems to happen here, 60 then bam, 40 and below).

I decided to push myself a bit for a faster run. I did over 3.5. I deviated from my normal route, so I don't think it was a full 4 miles, but definitely over 3.5. I may have to drive the route just to know for certain. I did do abs from the Step Pump and Jump workout (on same disc with Step Blast) before getting in a stretch while listening to Paula Deen add yet more butter to a recipe.

Tofu Tuesday
This morning I had enough time before I left for work to throw together a quick sweet and spicy tofu marinade for stir fry tonight. Love it when I get ahead of the game.

Directions:
Whisk all ingredients together and pour over cubed tofu. Allow to marinate at least 1 hour before baking.

When I was done with my workouts, all I had to do was start the rice and start baking the tofu for the stir fry. For that, I used a bag of mixed frozen veggies, 1/2 red bell pepper, some fresh sugar snap peas, water chestnuts for crunch and of course the tofu. I used whatever marinade I had left as well as some store-bought stir fry sauce I had on hand. 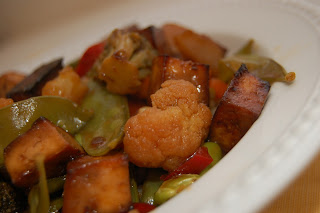 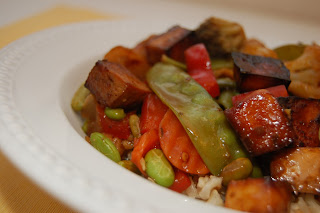 While this was going, I did throw together some Red Quinoa and Lentil Burgers using leftover lentils and quinoa from last night's dish. I am getting smarter about making extras to use for other dishes. So I have another meal ready to make this week with plenty of extra "burgers" to toss in the freezer for later.