By Heather Iacobacci-Miller November 17, 2010
Hill Repeats
I had sort of hoped I might wake up early enough this morning to either do a short step workout or biceps. That did not happen. I had a horrible night's sleep, again. For the past two nights, I've been suffering from restless leg syndrome. I used to have problems with it constantly many year ago, but it seemed to just disappear until Monday night.

If you've ever experienced it, you understand and know it's not a joke. If you haven't experienced it, it feels like a cross between electricity and bugs going up and down your legs making you feel the need to constantly move or twitch them. Needless to say, this does not bode well for a good night's rest at all.

Anyway, today was a bit warmer (though super windy) and sunny. It's been a while since I've done any running drills, so today Jason and I did hill repeats. We ran about 2 miles as a (windy) warm up then hit the hill 9 or 10 times. I was counting to 8, but Jason kept telling me a time. So, we kept going and I lost count because I was arguing that I knew we had already hit 8. He was aiming for 15 minutes, and I was only aiming for 8 repeats.

It was a good workout. Hill repeats are tough, but time flies by so you don't realize just how bad they are until after the fact. My hammies are fried (all caps). I forgot how much I enjoy these types of workouts actually. Do you prefer intervals and drills or steady state?

Weird Workout Combo
After work I was really being wishy washy and waivering about which weights to do. It should have been biceps just based on my own made up schedule. But I was thinking I should do legs then no running tomorrow so I could get in a better run on Friday. So many choices and decisions to make.

In the end, I went with an odd combination of legs and biceps. Hey, it's my crazy little world, I can do what I want right? I did supersets of 3x10 unless noted.

*Used ankle weights for these exercises. The key is to keep your inner thigh towards ceiling for front raises and towards floor for rear raise. These are ballet barre exercises.

This was actually a fun workout that went by really quickly. It's not a super heavy leg workout, but it's perfect when you've already worked your legs hard from something like hill repeats.

Soup Kind of Evening
We have a front moving through tonight that is supposed to bring cooler temps for the evening and into tomorrow. I was wavering on what to make. I guess it was a wavering kind of Wednesday for me. I tossed around the idea of fajitas and even Blackened Seitan Salad.

I ended up going with a soup because I had a few ingredients to use and could also multi-task (again) I made a soup that was partially based on Kabocha and Pumpkin Curry Soup but with a kick inspired by my friend Alicia, Butternut Squash Soup with Chiptole and Lime . I had kabocha to use along with pumpkin puree that I had opened for the Pumpkin Pie Bliss cocktails.

Directions:
In large soup pot, saute onions and garlic until begins to soften (about 5 minutes). Add in vegetable broth, pumpkin puree, kabocha, chipotle and spices and allow to simmer for approximately 15-20 minutes.

Transfer to a blender with tofu and puree until smooth. Transfer back to pot, add additional broth if too thick. Add in lemon juice, liquid smoke, and agave. Re-season if needed and allow to simmer for approximately 15 minutes.

I served this with tempeh bacon diced up on top to compliment the smoky flavors of the liquid smoke and chipotle. 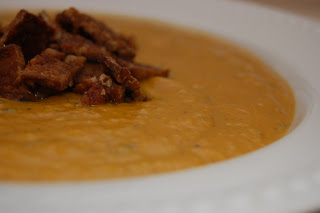 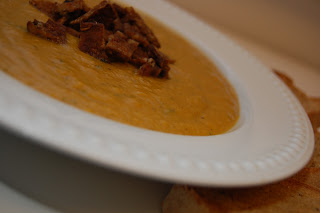 This turned out really well with a hint of heat and smoke. Definitely different than the typical curry flavors often used with winter squashes, or the sweetness. Oh and multi-tasking...I was the queen tonight. I roasted poblano peppers to use for a white chili possibly Saturday as well as making a 3 Bean Salad for a pot-luck at work tomorrow. I also have extra kabocha to use for a salad for myself tomorrow as there really won't be veggie friendly options other than what I'm bringing.