2.5 Miles and Baking - Treats and Dinner

By Heather Iacobacci-Miller December 09, 2010
2.5 Miles
I am really tired of these sub-30 degree mornings already. It's only December....going to be a long winter I'm afraid. Last night I had mentioned trying for a run today at lunch as it was supposed to be in the upper 40's. Jason ended up bowing out of the run. But, I had it in my head that I was going to try again today cold temps and gusty winds be damned.

I set out right at noon with winds between 10 and 18 mph and wind chill of 37. I warmed up inside with some high knee jogs and butt kicks. My goal is to always make sure my muscles are warm and loosened up before running. I hit the pavement and it felt so good. I didn't notice the cold one bit. Even the gusting wind felt like a treat. I tried to run on the sidewalks when I could (they are so terribly wonky in our neighborhood though) or run as close to the middle of the street as I safely could.

From what I've read, short, fast runs are more ideal when trying to get back into it. So that's what I went for. It felt so good that I really had to make myself stop running at 2.5 miles. I know that's what I am going to have to be very conscious of now. Just because it felt great, no pain, doesn't mean that I'm totally healed nor does it mean that another half a mile later would still be pain free. Stop while I'm ahead right? I didn't have a lot of time left to foam roll and ice. But I stretched the IT band and rolled it briefly. 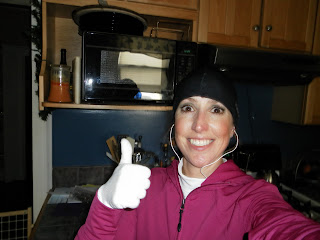 I will say that going back to the office and sitting rather than being able to ice was probably the one big downfall of the run. My knee did end up achy after sitting a couple of hours. I need to find something to prop my foot on.

Getting it Done
I totally did not want to do my weights and abs today. It was just one of those days when I felt like there was no way I could even look at a weight let alone lift one. I seriously contemplated skipping triceps and abs and doing them tomorrow on my rest day. In the end, the rational side of me took over and I got them done. Triceps were from STS Meso 2, Disc 19 and abs were from Kick, Punch, and Crunch.

I am glad I went ahead and got it done. After the workout, I stretched and rolled on the foam roller.


Baking Recap & Baking Pasta
We have a holiday party at work tomorrow where we do the whole Dirty Santa exchange game. We're also supposed to bring snacks (either sweet or savory). We tried an all desserts buffet last year. Barf. I have never felt so ill in my life. I never wanted to see another cookie, candy, cake, pie, dip again...ever.

Anyway, I actually love to bake, but rarely ever do so (other than bread). As I mentioned yesterday, I had picked out two recipes to try. I wasn't sure if I'd do one or both. I ended up doing both. 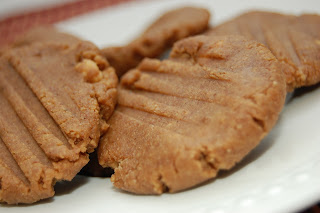 No-Bake Peanut Butter Cookies by Jessica @ How Sweet It IsI used NuNaturals Stevia Baking Blend in lieu of sugar and I used maple syrup. These turned out fabulous and were so easy to throw together. The next time I will use chunky peanut butter as I love the texture from the peanut bits. Oh, Jessica drizzled hers with chocolate, I omitted that step. But I think they would be gorgeous with a colored white chocolate for a festive look (like pink for Valentine's Day, green for St. Patty's Day). 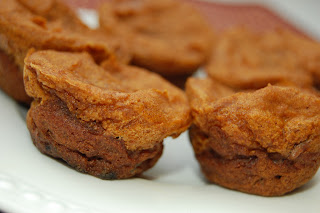 Pumpkin Pie Brownie Cupcakes from Angela @ Oh She Glows.
The only reason I even knew about these little pieces of heaven was because my friend Candice @ ChiaSeedMe recently made them. I knew I had to give them a shot. I'm not even a chocolate gal, but these are so good. Not too sweet, not too chocolaty either. Again, I used NuNaturals Stevia Baking Blend in place of the sugar (I only used 1/2 cup, omitting the additional tablespoons from the original recipe). I used whole-wheat pastry flour in lieu of kamut flour (which I did not have). Instead of coconut oil, I used 1/8 cup vegetable oil and 1/2 cup sugar-free applesauce.

We had some opened homemade pasta sauce that needed to be used up. I decided to go with an easy Baked Veggie Pasta dish. Basically I just sauteed up bell peppers, artichoke hearts, spinach, and some Quorn "beef" crumbles. I combined that with whole-wheat rotini, pasta sauce, some Daiya Vegan Mozzarella and baked until the topping was browned. I served with a nice big green salad on the side. 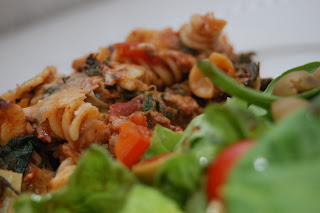 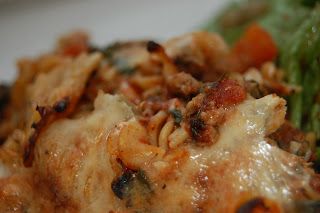 I will say that this was good, but Jason was happier with it than I was. It's been a while since I've had pasta, so I felt like this was more pasta than veggie. I think it's a perspective problem for me rather than an actual flavor thing.