By Heather Iacobacci-Miller December 07, 2010
Drug Testing
Wow, it was another sub-30 degree morning here. I live in the south, what is up with this???? At least it was sunny, and the heat in my car is now fixed. Two bonuses for the morning. The negative? Got to work, opened email, and had a notice that I had been selected for random drug testing. Good times, good times. When that happens, we MUST go to the testing facility by 4:30 pm that same day. I guess in the grand scheme of things it's not that big of a deal, just very annoying an inconvenient.


Weights and More Elliptical
At lunch I did a quick biceps workout from STS Meso 2, Disc 18 increasing to 75% of my 1RM.

I did abs from Cathe's High Reps workout and wore 1# weighted gloves, which added the perfect amount of additional resistance. After work I ended up heading back to the gym for 30 minutes on the elliptical. I had thought I might do the MMA Boxing workout (again), but I don't want to do it so much that I end up hating it. I already hate the elliptical ;-)

No Taco Tuesday
I had thought about making taco salad bowls tonight. But, we had some portobello mushrooms that needed to be use. I wasn't exactly sure what I wanted to do with them. I ended up making a Red Wine Portobello Mushroom Sauce to go over Quorn patties with Mustard Roasted Potatoes and Cranberry Kale.

Directions:
In large sauce pan, saute onion until begins to soften then add in OJ, balsamic vinegar, salt, pepper, cranberries. Stir in kale and allow to simmer until kale has softened.

Directions:
In medium sauce pan, saute onions until they begin to soften then add in portobellos. Saute another 5 minutes then add in wine, bouillon liquid, salt and pepper. Allow to simmer on low until most of the liquid has cooked down (do leave some). 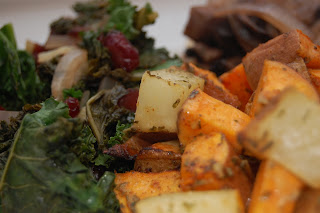 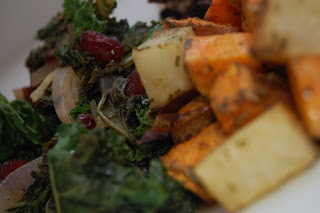 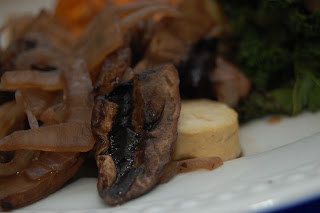 This actually felt like a holiday-type meal. Maybe it was the green and red from the kale and cranberry. Sometimes eating a seemingly more decadent meal on a week night is a good thing (not that this was super over the top of course).