By Heather Iacobacci-Miller December 18, 2010
Gluten-Free Pizza Hit
Pizza Friday was a big success. Sarah has officially declared that Bob's Red Meal Gluten-Free Pizza mix trumps the Bisquick hands down. I made it using the flax egg option so it was loaded with omega goodness too. This mix does make a lot of crust, so we split it into two smaller pizzas baking it and freezing one so she can use later. Thanks so much to my readers who suggested this mix!! 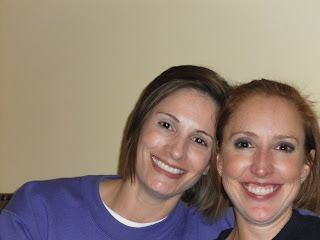 We had a great night. We listened to music, played some pool, chit chatted and just had a nice evening. All the dogs got along great too - Sarah brought her ex's dog with her. Heath was so happy to have another playmate. Maddie, could have cared less.


Good Day
This morning we got up and just piddled around for a bit before deciding that it'd be wise to head out to the mall earlier rather than later. Sarah wanted to hit up New York and Company. Who am I to deny her this? We behaved ourselves actually and only made two stops: New York and Company and The Limited. Scored great deals at both stores. Mind you, you only shopped for ourselves, no Christmas gifts being bought. I had a rewards certificate at The Limited and ended up with a turtleneck sweater for $3.21!!! Love scoring sweet deals like that.

We also made our way to Whole Foods so she could pick up a few things she can't get in her city. Then it was back home.

I thought we were going to try to head to the river trails for a run, but she decided she wanted to take today as a rest day. I decided to head out for a lap (or 2) around my neighborhood. It was about 45 degrees, but sunny. I got geared up and had a fantastic, pain-free 3.5 mile run. I made sure to roll the IT band and stretch extra since this was the longest run I've been able to do. I also iced my knee just to be safe. I am feeling much more positive now about signing up for the Little Rock Half Marathon in March.

Tonight I'll make Chipotle Tempeh Chili for everyone to enjoy. I hope everyone is having a great day!