By Heather Iacobacci-Miller December 23, 2010
Working it Out
This morning I thought I'd sleep in a bit as an indulgence on my first day off of my 4-day holiday weekend. Well, I was awake around 6, but stayed in bed at least until about 7:40 before giving up. Hey, it's start ;-) I got started on some of the cooking and prep for this evening's party. I made some cookies and a coffee cake before starting in on my workout.

Today was Shoulders and Triceps. As I've mentioned, I missed Week 2 of STS Meso 2, so I did that for today's workout but as a pyramid style increasing my weights as the reps dropped.

After the weights, I headed out for a chilly 3.5 mile run. Tuesday I was clad in sports bra and shorts, today I had on long tights, compression top, wind jacket, gloves, and ear band (headband over ears). BRRR. It was under 40 degrees and windy. I had zero problems with my IT band, but it was mentally a crappy run for me. The head band kept causing my ear buds to hurt my ears or fall out (kept adjusting) and it also kept making my glasses either smash into my nose or bounce. I was downright pissed by the end of the run. So much of my focus was on trying to fix the head situation.

Anyway, I rolled my IT band and stretched for about 20 minutes.

Kitchen Time
So, now for the baking and non-baking...
Jason had requested a coffee cake for the brunch theme. I did lots of internet searching to see if I could find a slightly healthier recipe. I ended up going with a Vegan Coffee Cake courtesy of The Clean Eating Mama. The only change I made is that she called for 3/4 cup can sugar. I used 1/4 cup of the NuNaturals Stevia Baking Blend and then the rest the called-for sugar.

Sarah and I usually do a cookie-baking day. But this year we opted for an easier treat option. Neither of us have as many people to pass the cookies off to this year since we didn't make them before our time off.

I went with a no-bake cookie. Not necessary Christmassy, but good nonetheless. After making Jessica @ How Sweet It Is No-Bake Peanut Butter Cookies, I knew I had to figure out a way to make them gluten-free for my sister. I decided to go all out and make a totally free cookie: gluten-, dairy-, sugar-free. Sounds horrible right? Not at all. They are fantastic.

Directions:
Combing the rice flour, 1/8 cup stevia, ginger and cinnamon in a large bowl. Once it's combined, add in the remaining ingredients and mix well. If the mixture is too dry, add in additional syrup.

Roll into balls and place on baking sheet and press flat. Refrigerate for at least 30 minutes. 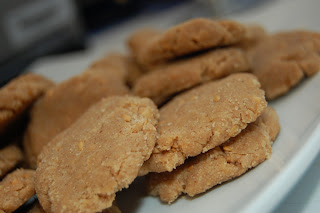 We also made some dolled up popcorn. Just popped a couple of bags and tossed with M&Ms and melted chocolate. 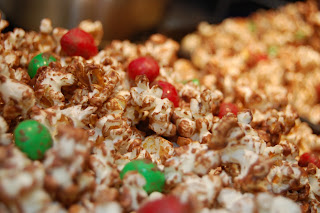 The other day, I saw a yummy looking treat posted by Kristy @ The Casual Dish for some Cherry Almond Chocolate Clusters. I thought the tart of the cherries, plus the texture of the cherries would be just fantastic with the almonds and paired with the chocolate. So instead of baking, I suggested to Sarah that we make something similar: White Chocolate Almond Cranberry Bark. This is definitely a major indulgence type of treat for me. Nothing I would normally ever make or eat. 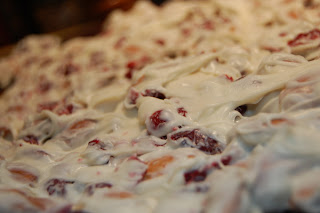 I'll be sure to post pictures of the spread along with the vegan frittata recipe and a review on taste. And of course I'll do a full recap of the party with pictures.