By Heather Iacobacci-Miller December 29, 2010
Well, I managed to get my errands run and make it to spin class yesterday. I thought that perhaps sweating out the, whatever, would help me feel better. Really all I was trying to do was not have snot dripping on my towel more than the sweat. I actually ended up feeling worse after spin. Usually a workout, even with a cold, makes me feel better. Not so yesterday.

Jason ended up stopping by Kroger on our way to Mt. Magazine to pick up more meds. I have been taking Zyrtec D (which usually helps). He wasn't sure what to get so he grabbed a myriad of things like Zicam, Ricola, even Airborne for himself as he was starting to get worried he was going to catch something from me. I've never tried Zicam, but though, what the hell....got nothing to lose at this point. Not sure if it did anything to be honest, but it didn't make me feel worse at least.

I dozed in the car for about 20 minutes or so, then he needed help with some directions. We made it safely in 2 hours. It was starting to get super foggy here though - but at least not cold enough to freeze. The evening started off in one of the cabins rented by a family member. They're calling it the hospitality cabin as we all have 24 hour access and it's stocked with wine, beer, liquor, sandwich makings, snacks, etc. We're staying in a room in the lodge itself. It's nice and cozy, and I mean that in a good way not an it's so small kind of way. Because of the fog, we had no idea what the views were like upon arrival. But, here's a picture of Brian (groom-to-be) and Jason in the hospitality cabin. 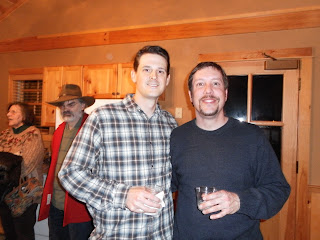 I brought a cooler of food, including my recent Crockpot Tempeh Chili. For the wedding eve dinner, they were serving chili, so this way I fit in. Jason took it and heated it up for me in one of the serving bowls so no one even noticed or made a big deal out of it. It was so nice for a change - I was expecting to eat it out of the avocado green Tupperware bowl (circa early 1970's). The theme of the night was game night as Brian, his father, and brother are huge card fans. So there were card games going on, a Wii was hooked up for the kids, and even a Baggo set up (I think some may call it corn in the hole?). 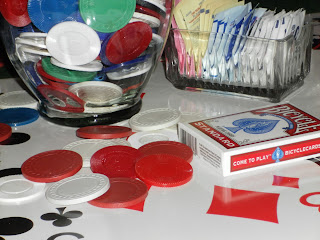 It really was a nice evening, everyone having fun. But I was just not feeling swell at all and ended up heading back to the room around 8:30. I felt bad for feeling bad. I so rarely get sick like this that it's really annoying. Usually I start feeling a bit ick, but then take something and recover just as fast as it came on. So I'm not used to this to say the least.

I got back to the room, took more medicine, crawled into my PJs and tried to relax. Then the fire alarms started going off, and going, and going....I had to leave the room in PJs, sans makeup, in the cold wet night alone. I couldn't get Jason on his cell either (it apparently died). Not a happy camper. I couldn't grasp how he wouldn't be trying to call me or find me with fire alarms going off. Apparently they were only going off on the guest room side and not the conference room half where the reception was. I was steaming mad of course not being able to find him and he was completely clueless. Ahhhh, good times.

This morning we woke up to more rain, more fog, still no views. I think we have a great view from our room...maybe tomorrow morning it'll be visible. I had oatmeal and then hit the gym. I got in a good 4 miles on the treadmill watching tv. Though, I must rant for a moment. A man came in with his 2 kids (boy probably 5, girl about 9) and let them play on the freaking equipment. I can understand bringing your kids down with you if you're trying to get in a workout. But this man just stood there watching the entire freaking time while his kids hopped from one piece of equipment to the other then even both on one of the treadmills. Seriously? They even started playing with the weight machines. Very distracting for one, but also dangerous for another. There is an indoor pool and a game room. So why take your kids to the fitness room to "play?"

Anyway, they wedding rehearsal was from 9:30-10:00 this morning. Jason went to the restaurant with everyone for breakfast while I was running and getting cleaned up. I went down to visit for a bit before we headed back to the room briefly. Internet was out, nothing on tv, I was getting hungry, so we went back to the restaurant. I got a side salad and dumped some blackened seitan on it that I had brought with me. Next on tap is to just kill a couple of hours before the wedding.

So with that, I'm signing off. I promise to take lots of pictures tonight. I charged the camera so it's ready to go.