By Heather Iacobacci-Miller January 13, 2011
4 Miles, Below Freezing, No Problem
Today was yet another chilly one. It was sunny at least. The skies were clear enough that you could see the moon even. I love that crispness in the sky. Now if only it weren't so darn crisp in the air too. Today's workout plan was a run. The half marathon training plan called for a 4-mile run followed by 4 1-meter gentle pickups*. I called Jason around 11 to see when he wanted to get out for the run. I was prepared to run outside (despite the temps). However, he was planning on the treadmill after work.

I told him that I was either going to run the 4-miles and intervals outside, or not at all. Period. That's how much I hate the treadmill. Anyway, it was about 22 degrees at that time. I said we could just eat lunch then go a little later. Well, that ended up being about 1:30. It warmed up to a balmy 27 degrees with a wind chill of a cozy 20 degrees. But it wasn't terribly windy so that really made a huge difference. I actually ended up really hot halfway through the run. Who knew you could get hot running outside in the frigid temps???

All in all, it was a pretty good run I must say. The cold will certainly slap you in the face and wake you up!

Gentle Pickups (GP): At the end of your run, walk for several minutes, then slowly increase your leg turnover on a flat stretch for 100 meters--the straightaway on a track--up to the point where you start to breathe hard. Hold it there for 10 to 20 meters, then gradually slow down. Walk to full recovery before you start the next one. The purpose of both AI and GP is to improve your stamina, leg speed, running efficiency, and to make your normal pace feel more comfortable. What's more, this kind of up-tempo running adds variety to your training. Always a good thing.

Pooped Out Means Easy Dinner
I think the run took more out of me than I had expected (and maybe some DOMS from yesterday) because I started to feel super fatigued around 4 and a bit achy in my back. When I mentioned it to Jason, he said he felt the same and that we ran pretty hard. Anyway, I got home and put on my PJs (big shocker) and stretched for a bit thinking that might help. Thankfully my IT band seems to be doing ok. It was a tad achy, but nothing really terrible and no pain at the knee. Tomorrow is a rest day for sure.

Since I wasn't feeling super peppy, that meant I wasn't super excited about dinner either. Soup sounded so good though, just warm and comforting. I started thinking of some ideas, but then remembered Jason had soup for lunch. He was wanting stir fry, but I really didn't feel like that. If I really just don't want something, I have a hard time making myself eat it. Are you that way or can you just go with anything?

So I decided to just go with homemade veggie burgers and baked sweet potatoes. In the freezer I had my Black on Black Burgers I made up a few weeks ago, but we hadn't had them yet. Hard to believe it's been so long since I've had this handy dandy, go-to meal! Guess I've been working harder in the kitchen lately than I thought. 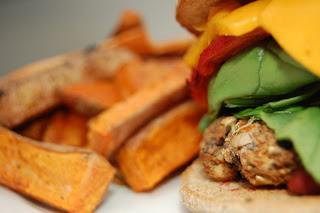 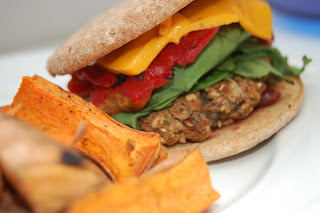 These were really rather tasty. Sometimes black beans can be a little dry, but the black-eyed peas were softer so it was a good balance. I topped them with a vegan "cheese," roasted red bell peppers, spinach, and some Chipotle Cranberry Relish.