By Heather Iacobacci-Miller January 03, 2011
Still Crummy
While I was exhausted at the end of the day, I will say that I am so glad I took the time to do so much in the kitchen yesterday. It made dinner tonight (Moroccan Chickpea and Tofu Stew) a snap and that came in handy as I am still feeling rather cruddy. I think part of it is feeling cruddy and part of it the meds. This is the longest I've felt this crummy in a LONG time. It sucks that Jason is sick too. I am afraid it is more of a cold that I may have passed along to him rather than just allergies as we both originally thought.

I actually ended up leaving work a little after noon to come home. My job isn't one that normally allows me to work from home as I need access to the network drives. However, I often have writing projects to do. Luckily, I had a few things I could do from home. This meant I could go home and lounge in comfy clothes and hack, cough, blow my nose in peace ;-)

Honesty time - I will admit to doing biceps from STS Meso 3 though. No surprise, it wasn't my strongest workout. I know I shouldn't have even tried it. But knowing and doing can be two different things when you get something stuck in your head. So, I did the following 3 exercises as 4 sets of 8 reps at 80% of my 1RM. I also did abs from Cathe's Step, Jump and Pump.

I did manage to do the exercises at the weights I had hoped, but it was definitely more of a struggle than I think it should have been. Plus it's hard to really concentrate when your nose is either running down the front or down the back.


More Crockpot Cooking
As I mentioned yesterday, I was marinating and baking tofu for a crockpot recipe to use today. I had cooked off some chickpeas and black beans and knew I wanted to play around with the crockpot again. I've been wanting a Moroccan style soup or stew. I ended up coming up with a Moroccan Chickpea and Tofu Stew.

Directions:
Place all ingredients into your crockpot and cook on low for 6 hours.

Directions:
Combine all ingredients in large bowl then toss in tofu. Allow to marinate at least one hour.

Bake at 450 degrees until firm, approximately 45 minutes flipping once halfway through baking. 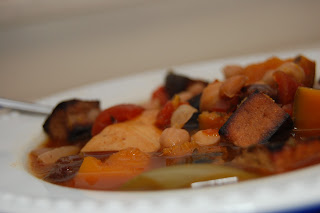 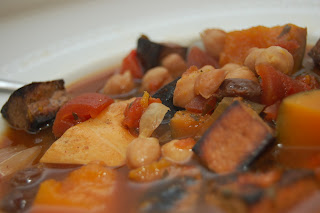 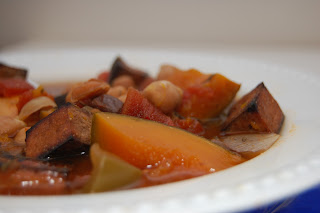 This did turn out to be more of a soup than a stew so the next time I'll either add in some tomato paste to help thicken it or add just a little less broth. Of course, Jason seems to prefer a soupier broth and I like a thicker style. Either way, this was another winner and super easy as I had already cut up everything and set out all spices last night.

Another Recipe From Yesterday
Yes, this sort of throws off my typical posts of workouts and evening meal. But I wanted to go ahead and post this recipe...As I mentioned yesterday, I was a busy bee in the kitchen. Since I had cooked off black beans and also had leftover black-eyed peas from my Lucky New Year's Stew, I decided to go ahead and make some veggie burgers while I already had the oven on for the tofu. I was out of frozen veggie burgers anyway, so this worked out well in regards to timing. I came up with a Black on Black Bean Burger (please note that the bean amounts are approximate).

Blend beans, carrots, and onion in food processor until slightly smooth (I like a little texture).

Transfer to large bowl and mix in remaining ingredients.

Form into patties and bake approximately 30 minutes, flip and bake another 20-30 minutes until firm.