By Heather Iacobacci-Miller January 27, 2011
Nice Day for a Run
Today turned out to be a sunny, warm day (well, warm for January). It was in the upper 50's so that may as well be 70 degrees right about now. I had a long-ish run scheduled for today that included some intervals. Here's what the weather looked like when I set out for my run. 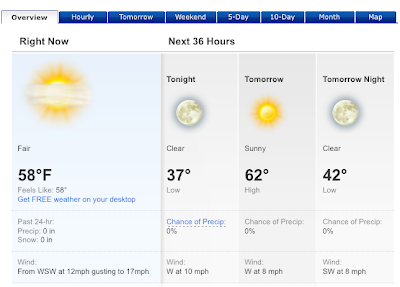 It was simply too nice outside not to take the run to the river trails (even with the wind gusts), plus, the Big Dam Bridge provides the perfect incline for the incline intervals the run called for.

I had a really really good run. For the first time in ages at the turnaround I didn't feel like I had been smacked by a wall of wind. The wind actually felt nice as I had on long sleeves so was getting little warm. The 6 miles really was just a blur. It flew by as I just bee-bopped along with my music, soaking up the sunshine. I felt really strong.

The incline intervals were no joke. A minute and half feels long a long as time going up a hill. But man did they make me feel like a serious badass. I have to say that after the inclines, the pickups on flat ground seemed like a cinch. Funny how that works. I imagine my hams and quads will be talking back to me tomorrow though.

I got home and spent some time stretching and rolling out with my TriggerPoint Therapy Kit before getting cleaned up.

Pre-Made Dinner
I was relatively pooped from the workout and super thankful that I had taken the time to get most of tonight's dinner finished up yesterday. All I had to do was throw some sweet potatoes in the oven for a side to my BBQ Portobello and Tempeh.

Directions:
In large skillet, saute onion, garlic, and portobello until the portobello begins to soften. Add in the tempeh and allow that to begin to crisp. Stir in BBQ sauce and hot sauce and allow to simmer. 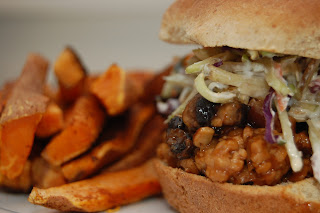 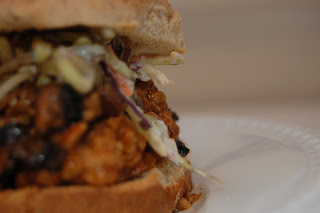 Serve on a bun or in a wrap with slaw. This would actually be really good on a salad as well to be quite honest. It was just as tasty cold as it was reheated. I have a feeling this will become a summertime favorite for us (just add in some grilled corn and veggies).

Now we're going to relax on the couch and watch The Grown Ups. We did the Red Box deal for the first time because I saw a free rental code. Normally we do Netflix, but the two movies we have in are both in the 2+ hour time range. That isn't happening tonight. So short, funny (I hope), mindless.