By Heather Iacobacci-Miller January 29, 2011
Felt Like a Spring Run
Today was an absolutely, unbelievably gorgeous day. Seventy-three degrees in January??? I'll gladly take it. Jason had some errands to run and he wanted to bike rather than run, so I headed to the river trails solo. Of course, it was packed down there so I was anything but alone. In fact, when Jason got home he asked if everyone in the city was down there when I was as well. Yep.

I got in a really good 9.5 miles today. No IT band pain at all, but my piriformis on my left side did start to hurt around 5 miles into the run, but nothing sidelining.

The only big fail was that I ran out of water and tried to stop at two different water fountains that were shut off. Not cool at all when it's warm out, you really need to take in a shot blok, and you have no water and are more than a mile from your car. I may have to get a larger water bottle or see if I can stand running with a water belt.

This could have been a fail...I was running in new shoes today too. Probably not my smartest move - running 9.5 miles in new shoes, but the tread on my other shoes was pretty much gone on the outer edges. I'm glad to report that the new shoes felt great - Brooks Ghost 3.

Smiling Kind of Saturday
I was super excited to be able to put the top down on the car for the drive back to the house. A girl could get used to this kind of weather! I got home and decided to try a Vega Whole Food Optimizer drink. Our Whole Foods finally started carrying the Vega brand, so I picked up a packet of the Vanilla Chai. It was ok, maybe I just didn't know what to expect. But I love that it's all plant-based. After the Vega drink, I spent about 30 minutes stretching and rolling on my TriggerPoint Therapy Kit .

So what can make for a better Saturday when you already have beautiful weather and had a great run? How about a blogger gift box waiting for you. I recently won a giveaway from the incredibly kind Candice @ ChiaSeedMe. This most certainly brought a smile to my face. She included a handmade note card with the kindest words, homemade super charge me vegan cookies (delish by the way), Prirates Booty, a carrot cake flavored Larabar, Alba lib balm (a girl can never have too much lip balm) and a stress relief candle. Candice - you're the best!!! 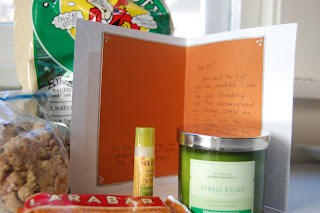 We have a housewarming to go to this evening. I was asked to bring a couple of things. I made up a roasted red bell pepper hummus, some Black Bean & Corn Salsa, and I tried to make Sarena's Peanut Butter & Honey Cereal Bars as well.

I had some puffed rice cereal that Jason bought randomly and tried using that. and tossed in some chocolate chips. I don't think I pressed it down tight enough though, as mine came out a bit crumbly. Sarena's definitely looked prettier. I doubt anyone is going to mind though. 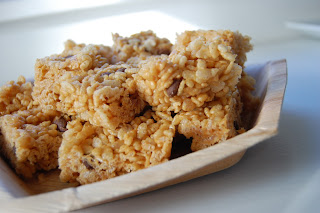 So what made you smile this Saturday?