By Heather Iacobacci-Miller January 02, 2011
First Stew of 2011
As promised, here are the recipes from our New Year's Dinner. Like I said yesterday, we don't normally make it a point to get in all the "lucky" dishes like black-eyed peas and cabbage. However, it was the perfect opportunity for me to use my new crockpot (correctly). I also made a Vegan Chiptole Cornbread to go along with this hearty Lucky New Year's Stew.

Directions:
Put all ingredients minus the kale in the crockpot and cook on low for approximately 5 hours. Add in the kale and cook an additional 30 minutes on high or hour on low. 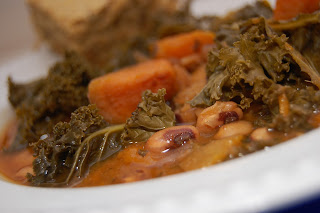 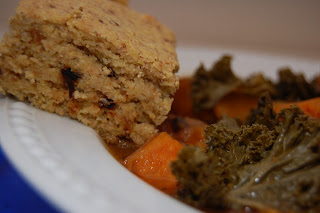 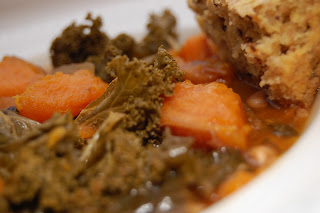 This stew ended up being so good. The sweet potatoes really imparted a slight sweetness into the broth itself, but the kale and black-eyed peas balanced it out nicely. The textures were great. It was a great, hearty stew. It's one I'll make again, probably trying with black beans. The cornbread had a really nice texture, but was a little bland. I think it needed a little more agave and salt.

Leg Day
Today started of at about 28 degrees. I was thinking about getting chores done then heading out for a run later on. However, Jason was feeling really cruddy today (he's had the same cold/allergy/crud) I've had. I ended up just opting for a leg workout instead. I went with three trisets of 3x8 unless noted then followed up with a few additional exercises.

I finished off legs (literally) with the high- and low-impact HIIT segments from Cathe's Intensity DVD. Shaky legs for sure. I stretched and rolled using my new TriggerPoint Therapy Kit

before getting cleaned up for lunch.

Productive Sunday
After lunch, it was time to get serious (aka productive). In order to make the productive day more comfortable, I stayed comfy in some sweats. Yep, no makeup, no hair styling, no real clothes kind of Sunday.

We got all the Christmas decorations put away, which is really depressing. I always think the house looks so bare and empty once the decorations come down. I started two pots of beans (chickpeas and black beans). I also dusted, swept, and swiffered. I started pressing tofu to bake for a crockpot stew I'm going to try out tomorrow using the chickpeas and probably kabocha squash.

I may use some leftover black-eyed peas to throw together some veggie burgers and bake those at the same time I bake the tofu. But, I will admit that I'm slowly running out of steam. In fact, dinner may just be leftovers from last night. So, I'm going to post early today and maybe go sit and watch a movie with Jason.