Productive Wednesday - Even Made Tomorrow's Dinner

By Heather Iacobacci-Miller January 26, 2011
Weights & Elliptical on Wednesday
Today I had thought about running 3-4 miles of tomorrow's planned run making tomorrow's run with intervals shorter. But, my legs were against that idea. So, I decided to hit the gym after work (despite the fact that it was way to nice out to be inside). I wanted to get back done, and had thought I might do chest as well to be done with weights for the week. In the end, I just did back and abs. I started with 20 minutes on the elliptical to warm up before hitting the weights. I really only planned on 10, but someone was using the barbell I needed.

This is yet another tweaked version of my last back workout from Cathe's STS rotation. It was done at 4 sets of 8 reps at my 1RM.

I also did some ab work before finishing up with about 5 minutes more on the elliptical before calling it done. All in all, it was a pretty good workout and even the elliptical time seemed to go by quickly today. Gotta love that.

Two Meals Made
I had been thinking about one dish I had wanted to make tonight, but then realized that there was some kabocha squash already roasted up in the fridge that had to be used right away. I mean, it would be a huge food fail to let that go to waste.

So I actually ended up making dinner for tomorrow (BBQ Portobello and Tempeh, will post recipe tomorrow) and a Chiptole Kabocha and Black Bean Chili for tonight's dinner. It was really hardly any extra effort to get tomorrow's meal done while I was getting the chili made. Tomorrow will be a later workout night, so a quick meal is going to come in handy.

Directions:
In large pot, saute onions, bell peppers, garlic, and tempeh until tempeh is browned and onions and peppers are beginning to soften. Add in remaining ingredients up to the kabocha. Let simmer until veggies are cooked then stir in the kabocha and tomato paste and allow to simmer until kabocha is warmed through and chili has thickened to desired consistency.

*Note, you can also use sweet potatoes or butternut squash. Additionally, if you don't have them pre-cooked, just cube them smaller and add them in at the beginning of the cooking. 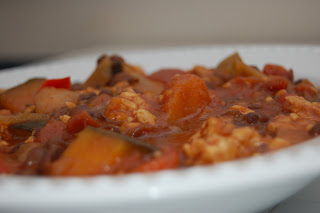 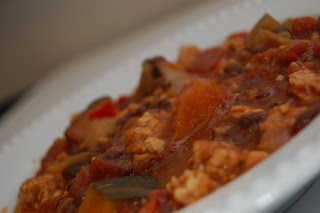