By Heather Iacobacci-Miller January 06, 2011
Running Day
Well, the rest day yesterday did help some, but I still felt really drained most of the day. On tap for workout was Week 1, Day 2 of the half marathon training plan. Jason has not started the plan yet, but he said he was going to start it with me today. He wanted to try to get the workout done during lunch and I agreed, but man was I reluctant (and dragging boooottttyyyy).

It was sunny, about 51 degrees, but winds gusting up to 20 mph. Ahhhhh good times friends. The plan was a 4-mile run with 4 100-meter gentle pickups at the end of the run. This meant that you started slowly then built up speed for 100 meters (about 20 seconds) then jogged to recover and repeated.

Sounded reasonable enough...But my legs felt like lead weights today. I'm just having such a hard time getting out of my head now. I am over-analyzing everything from the tilt of the road to any minor muscle twitch. It's frustrating because I was on cloud 9 with almost every run before. I know I just need to get out of my head again and remember all the things I was loving about running before.

Anyway, we got it done. It was probably harder for Jason as he is about one day behind me on the cold/crud stuff we've both had and hasn't run in two weeks. But he sucked it up and did this with me. It actually gave me a pretty good energy boost thankfully.

Fajitas Two Ways
When I asked Jason what he wanted for dinner he named off about three dishes that were all rice based somehow. Totally not appealing to me today. I asked again and he said fajita wraps. Still not appealing, other than they are fast, easy, and veggie-filled. I did end up making mine into a Fajita Taco Salad Bowl rather than a wrap. Jason is obsessed with wraps, I'll take my salad ;-)

It's really not much of a recipe. I just sauteed onions, bell peppers and garlic until soft. Then I added in yellow squash and zucchini along with homemade Chikn' Seitan. I seasoned with your typical Tex-Mex blend of salt, pepper, chili powder, red pepper, cumin, cilantro, and a splash of lime juice. 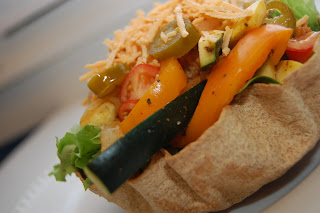 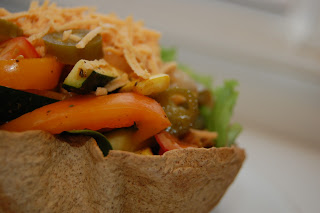 Of course I piled on the jalapenos. They help clear the sinuses too ;-)