By Heather Iacobacci-Miller January 09, 2011
Getting Things Done
This morning I got up and immediately went into action. I felt like I had been pretty lazy yesterday, so today I was determined to get things done. I started off by cooking off white and black beans. I needed the white beans for tonight's dinner. And quite frankly, you can never have too many bags of frozen beans in the freezer.

I also got to baking. I had an order for three bags of treats (3 different flavors), so I got those rolling right away as well. When Jason came downstairs, he stopped and stared and said it looked like a tornado had hit the kitchen.

Cold Training Run
After the last of the treats were done and beans put away, it was time to head out for our longer run. The half marathon training plan called for a 6-7 mile run. Not too bad, except that when we left the house it was 26 degrees, winds gusting up to 23 mph, and wind chill of 13 degrees. Let's just say lots and lots of layers were involved. I even broke out my old dance "sweat" pants that I used to wear in ballet to keep my legs hot. And when I say sweat pants, I mean like black, plastic type pants that lock in any and all heat. I had those over my Under Armour pants, 2 tops, and a kick-butt cold weather running jacket. In all honesty, the only part that was ever really terribly cold was my face.

It ended up being a really good run for me actually. Never in a million years would I had ever thought I would enjoy running 6.6 miles in the freezing (literally) cold. But I did. It was invigorating to say the least. We did manage to get the run done before the snow hit today. Even better, I didn't have any knee pain related to my IT Band. I will admit that after the run, my IT Band was definitely tighter. I definitely rolled and stretched a lot. I think it'll be ok though. I don't have another longer run for several days.

Snowy Sunday = Chili
After the run, I got back to my to-do list. I made some Chikn' Seitan and roasted poblano and green bell peppers for dinner tonight. Because we knew it was going to be super cold, we had already settled on Spicy White Chili for dinner. I also started washing tons of laundry, about 3/4 of it was workout gear. I am glad we have an active household, but man does it mean lots more laundry!

So, back to the impending snow. The official freak out started yesterday. Jason and I were both rather skeptical about the snow of course. We thought maybe a dusting at best. It finally started snowing around 2:30 and it just kept on coming down. By 4 pm, the roads were actually covered. Um, so much for the dusting. I was really really surprised as it was 60 degrees on Friday!

I pulled on my rain boots and stepped out back to get a couple of pictures. I know the majority of my readers are fairly unimpressed by snow. I am too for the most part - to have it means it's just freaking cold. But it is rare here and it can be pretty. 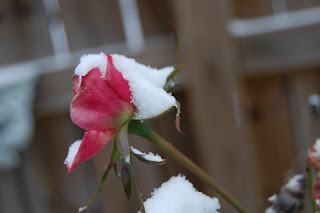 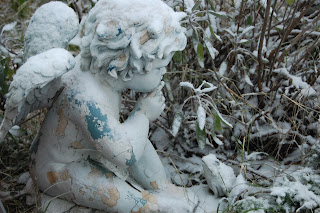 These were taken around 4:30 pm. So it was only about 2 inches at this time. But I wanted to try to get some pictures taken before it got dark. 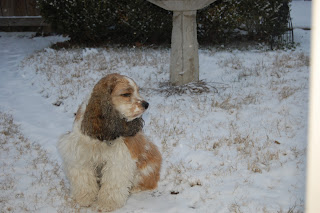 I was only able to get pictures of Heath. Maddie wouldn't stand out there - though in the past she's loved the snow.

And then dinner was a nice warming chili. Not super pretty, but perfect for this evening. 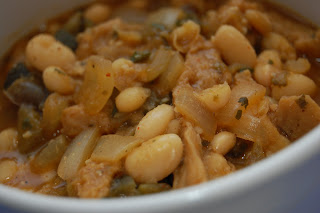