The South is Frozen - This Calls for Pasta

By Heather Iacobacci-Miller January 12, 2011
Freezing Outside
Well, I know almost every single state has snow, but I have to bring up our frigid temperatures. It was warmer on the days it snowed here! Walking into work at 7 am, it was 16 degrees with wind chill of 2. Yes, that's a single digit friends. I thought I lived in the south??!! I guess the only saving grace was that it was sunny. Sometimes really cold days are some of the prettiest - so crisp (literally). Tomorrow's high is only 32 and that's not the wind chill of course. It's going to make the scheduled 4-miler a bitch.

Gym Day
Speaking of workouts, today I did 15 minutes on the elliptical then hit the weights. I did biceps for STS Week 2 of Meso 3 (sort of). Since I was at the gym, I didn't have my weighted gloves that allow me to micro load (in 1 and 2 pound increments). So say I did 15 pounds last week and needed to increase 5% this week. I could use the gloves to do that rather than trying to jump from 15 to 20. Also, the incline curls are supposed to be on the stability ball, they have balls, but they're smaller and mostly flat. so I ended up making a few modifications. The exercises were supposed to be done in 4 sets of 7 reps, increasing 5% from last week.

Hammer curls (supposed to be incline on ball, started with heavies weight for as many reps as could, before lowering weight - typically got in 5 before lowering for the last 2)

I was able to go up quite a bit for the dumbbell curls and only hit failure at the 6th rep once. I think that I burned out the biceps though, because the other exercises I felt a lot weaker, of course, I was trying to use a heavier weight than I would have liked. I also did some ab work as well before finishing off with about 7 more minutes on the elliptical.

Catching up on Errands
Today I only worked until 12:20. I had an appointment at 12:45 that had been moved around from another day. I wasn't sure how long it would really take, but I knew I wouldn't be getting back to work until after 2 or so. So I ended up taking the rest of the day off.

I had lots of errands to run actually, so it sort of worked out that the appointment got moved. Because of the snow and then slick roads, I had not been able to get to Target or Whole Foods. Today I managed both. However, I got home and realized I had forgotten one major thing on the Target list: contact solution. Ugh. I swear I always forget at least one thing. Do you do that too?

Pasta Wednesday
Since I had already gotten my workout done, I had a little more time to play with dinner. Meaning I was done with everything around 4:30 for a change. I swear you'd think Jason was totally deprived, the poor guy keeps asking for pasta when I ask him if he has dinner thoughts. Since I had more time this evening, and we had 2 large portobellos to use up, I made my Creamy Portobello Pasta. 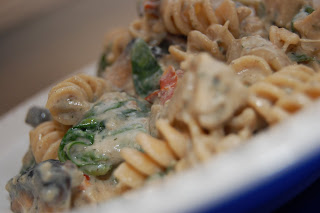 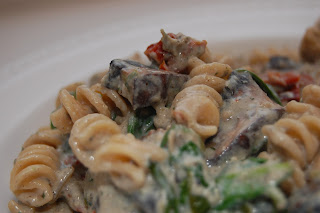 It really and truly feels like a decadent, sinful, fat-filled dish. The great thing is...it's not. I guess the most decadent part is the whole-wheat pasta; I call that decadent because I really don't eat a lot of pasta. But at least the whole-wheat is filled with extra protein too. Do you have a dish you make that seems really decadent, but is actually pretty good for you?