By Heather Iacobacci-Miller January 23, 2011
Sushi Saturday Success
So last night I finally did it. I finally made sushi! Well, ok, I only did one roll and let Jason do the rest of them, but that's not the point. We were like kids in a candy store coming up with combos to make. We went a little overboard, but it was so fun.

The ingredients we used to make a variety of combos were: Kabocha squash, portobellos, asparagus, red and yellow bell peppers, zucchini, and, avocado.

I also made some spring rolls with a Spicy Sweet Peanut Dipping Sauce and some baked tofu cubes.We obviously made wayyyyy too much. For the filling for the spring rolls, I used a broccoli slaw mix (it was a manager special) and combined with basically the same ingredients in the dipping sauce but also added in some vegan tom yum.

Directions:
Whisk together all ingredients to desired consistency. (Note, start with less on the wet ingredients then add in more depending on how thick or runny you prefer.) 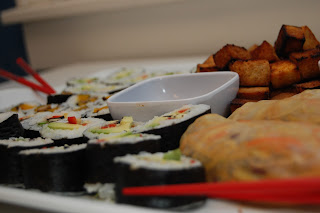 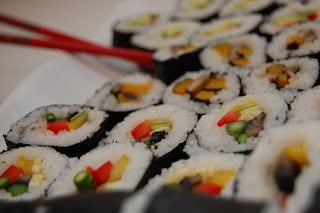 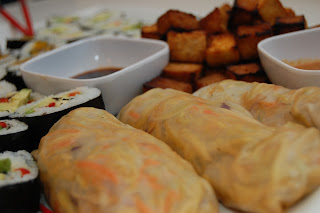 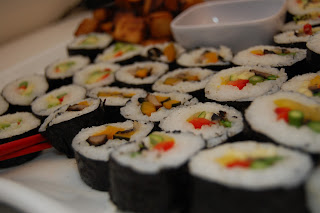 This is most definitely something we'll be doing again. We really had fun coming up with the different fillings and have some more fun ideas to try out. Guess I can go ahead and invest in the bamboo rolling mat now ;-)

Running on a Lazy Sunday
This morning I was sort of lazy. I stayed in PJs until we left for our run around 11:30. But I did get dinner started in the crockpot (posting recipe tomorrow) so that meant dinner was taken care of early on and that can be such a relief sometimes.

Since yesterday's run was a longer one, today we planned on doing 4. This put me at the estimated weekly mileage total for the training plan (24 miles) even if I did completely redo what had been scheduled for this weekend. We ended up doing 4.1 miles at an average 8:21 pace.

I won't lie and say it was just a super fantastic run. I struggled a little bit today with my breathing, so it felt like we were going even harder/faster. It was definitely not sunny and pretty today either. Kind of gloomy, but at least it wasn't terribly cold and not rainy as predicted.

Overall, we had a pretty uneventful Sunday. That can be a good thing though right? Basically that meant that we were really lazy. We had a super late lunch (again). I did manage to get laundry washed (not folded of course). At least we have workout clothes for the week. I swear that's the majority of what I wash these days.

There are so many things on the to-do list that I should have at least attempted to tackle, but I feel no guilt in being lazy this weekend for a change. Though, I did also at least bake spaghetti squash to use in a couple of dishes this week. So not completely a bum right?