By Heather Iacobacci-Miller January 18, 2011
Tired, Two on Tuesday
Can I just say dreary days suck? They kept saying clearing today....it's been so incredibly foggy though so that means damp. Thankfully it was about 50 degrees, but did I mention damp? So it felt cooler (as in 45 degrees) but not freezing at least.

I was feeling so lazy about working out. I had thought Jason and I might try to get in our training run at lunch. He had other plans apparently that he failed to mention. I ended up going home and getting in shoulders and triceps. I increased weights again (90% of 1RM) and dropped the number of reps so that it was 4 sets of 6 reps.

I was very happy with the weights today; I had a strong feeling day oddly enough.

Onto workout #2. Today's half marathon training plan called for 2 miles, then Athletic Intervals of 1:00, 1:30, 2:00 done twice through, then another 2 miles. (Intervals were fast run, then slow job to bring down heart rate.) I brought my gym bag with me to work with clothes for either the gym or for a run outside. I ended up opting for the run outside. Now, the weather forecast had called for clearing in the afternoon and highs in the mid-50's. Um...not so much. The sun never came out. When I headed out for my run at the river trails, it was cloudy, still foggy, and wind chill of 45 degrees.

The first two miles were actually really good. They seemed to just fly by. Then came the intervals. Well, I got 'em done. They were definitely not what I'd call fun, but they went quickly. Then came the turn around and that put me into the head winds. I almost always seem to end my runs into the wind. What gives???? Anyway, all said and done, I got in 6 miles in 53:22. Not super great pace, but not too bad considering the slow jogs in the intervals to lower the heart rate.

Two-Bean Tuesday
So no Taco, Tofu, or Tempeh Tuesday....But how about Two-Bean Tuesday??? Our food stash is starting to thin out. We should have gone to the store on Sunday. That didn't happen, so I got creative with a Crockpot Two-Bean Vegetable Soup that I started at lunch. And after that run, which totally wiped me out, I was one happy girl to have that soup waiting on me.

Directions:
Put all ingredients (minus the paste) into crockpot and set to cook on low for 6 hours. Stir in the paste at the very end just to add some richness. 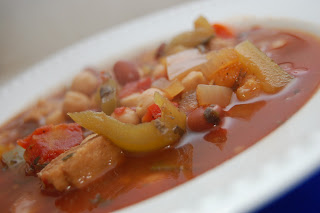 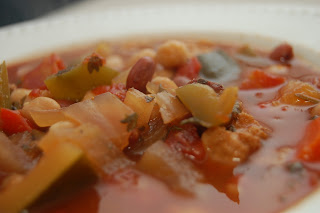 Did I mention how happy this soup made me? Not only was it warming after a chilling run, but it was ready and waiting for me. Two days in a row of pain-free meals is spoiling me. Oh and how did the soup taste you ask? It reminded me a bit of a minestrone. I think the addition of some whole-wheat pasta or barley would be fantastic.

And I must give a special shout out to my mom - Happy Birthday Mom- I love you!!!!!