By Heather Iacobacci-Miller January 24, 2011
Heather vs The Crockpot
Ok so you remember yesterday that I mentioned starting a crockpot dinner? Well, we ended up having leftover sushi instead. It's not because the crockpot dinner was inedible, it's because it was taking WAY too long. Yes, started it at 10 am and it was still not ready by 7pm. Clearly I need to learn to follow a few crockpot recipes or read up on cooking times before just coming up with recipes off the cuff.

I had decided to try to make Vegan Crockpot Red Beans and Rice. I say try because I've never really made it. Jason used to make a red beans and rice dish for us eons ago, but he couldn't remember what he used to do. So, here's my version, with lots of notes on improvement at the end.

Directions:
Put all ingredients up to the "sausages" into the crockpot and cook on low for 6 hours. Then cook for 1 hours on high then lightly mash beans before adding in remaining ingredients and cook another hour on high. 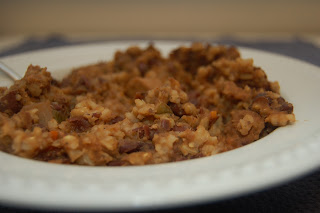 At least dinner was already made for tonight right? It looked terrible, but it tasted good, and that's what matters the most.
Monday Confessional
So, today was one of those "gotta peel myself out of the bed" kind of mornings. I had zero energy. The dark certainly didn't help. I will be so glad when it starts to get lighter earlier. I had thought I might try to get shoulders and triceps done at lunch. But I just wasn't in the mood, period. I had zero desire to put on workout clothes, to heft a heavy weight, to even break a sweat at all. So instead I went home, changed over laundry and we watched an episode of The Big Bang Theory.

Confession time: that made me feel lazy. Yes, I realize this is irrational. I'll be the first to admit that. But I felt flat out lazy for just sitting on my lunch break. More confessions? Ok, I didn't want to do any workout at all today period. I had thought that I might end up finding the energy to get in the weights and abs after work. But you know what, I said screw it. I haven't done abs since Thursday so I'm ticked about that too.

It most definitely wasn't easy to just say screw it. I am having a major internal battle going on. I know that if I am so unmotivated to workout, then I need to just call it a rest day. But then I have that part of me that is saying, "You're just being lazy, just get started. Oh, and remember you want Friday as a rest day so suck it up." I have had so many tell me how inspiring I am. This certainly doesn't sound inspiring huh? See, I'm totally human!

More confessions...I know that many of you have trained for half and full marathons before. Some of you did so under the radar with zero complaints. So this makes admitting the next part really bad, like I'm just a whimp. But I feel like whining, moaning, and throwing a big-ass fit.

I'm exhausted feeling (and my mileage isn't even up that high yet), I don't want to freaking run outside in the damn cold and wind one more time, I don't want to do another 3 miles + speed drills + 2 miles training day. *Picture stomping feet, clinched fists, bratty child*

So there, I said it. I am losing motivation steam big time. I am doubting my ability to run the race both for mental and physical reasons. I obviously need a big fat attitude adjustment today. Definitely not the ideal way to start off the week huh?

Weights Done
Oh, and back to the screw it part...I lied. I ended up getting home and hitting the weights and getting in abs. Even better, I had a really strong workout. I did completed the final STS workout for biceps, shoulders, and triceps. Today was done as trisets (since I didn't split it out) of 4 x 8 at 85% of my 1RM.

I did abs from Cathe's High Reps DVD using 1# weighted gloves for added resistance. So now all I have left from STS is back and chest. Then I guess I will start to re-think my weights and the type of weight training I can handle with the half training.