By Heather Iacobacci-Miller February 01, 2011
Bad Weather = Dreadmill
(warning, bitching and moaning ahead)
This morning was a tough one in regards to getting out of bed. Normally I am up before the alarm ever goes off. This morning I woke up just before 6 am and thought I'd just doze for a few minutes. I apparently fell right on back to sleep and was startled awake 20 minutes later by the alarm. I was so confused and disoriented. Apparently I was in desperate need of sleep. I should mention that I was in be on my way to dreamland by 8:45 last night and only woke up once around 3am.

It was a super nasty, dark, pouring down rain morning. Even with rain boots and rain coat, my legs were soaked when I got into the office. Luckily (or maybe not as we didn't get out of work for it) we missed the major snow/ice the north part of the state was pummeled with. But the temps steadily dropped and the winds steadily grew stronger. Um hello 35 mph gusts. So even though the rain cleared out around noon-ish, a run outside just wasn't going to happen.

Enter the dreadmill. The half marathon training plan this week is pretty much exactly like last week. Today was 3 miles, 3 x (2:00, 2:30) intervals, 2 miles. I did this workout last week at the river trails and it ended up being 8 miles.

The thought of 8 miles on the treadmill really was enough to bring me to tears. I think part of the problem is that the gym is absolutely stifling. There is no air flow at all. Plus you just stare out over the river (pretty view), which gets really old, really quickly. Give me some people walking around or something. You can't see the tvs from the treadmill, and even if you could, you get CNN, ESPN, or TNT (I think that's the channel). Sorry for all the bitching, but it's just really not conducive to a good workout at all.

Anyway, I made it. I did all freaking 8 miles. The first 3 weren't terrible. I did snag a treadmill right in front of the only fan. The intervals went fairly quickly because I was more focussed on not dying. The last 2 miles though....dragged on forever.

I swear this seemed so much more difficult on the treadmill, not just because I don't like it, but I am not sure the treadmills are calibrated correctly. It definitely took me longer to do this one than last week (though I was probably not doing my recovery jogs slow enough). On the treadmill, I was trying to do my recovery interval jogs at a 10:10 pace, but that really felt faster and my heart rate was never really dropping much. Typically a 10 minute-mile feels painfully slow. I'm not sure exactly how to find out if they're off though.

How do you guys who do run on the treadmill make it more enjoyable? Is it enjoyable only because you have no other choice or is it because it's at home, or you have options of changing channels and controlling the air? I need a serious attitude adjustment here because I know that there will likely be more treadmill runs before the half marathon.

Tempeh Tuesday
Jason had to hit the gym after work for his run as well, so I wanted a pretty simple dinner. But I was wanting lots of veggies. Rather than going with soup again, I opted for a Roasted Veggie & Tempeh Salad. It's so basic, but something really satisfying about it. The veggies today were golden new potatoes, carrots, red and green bell peppers, yellow squash, and zucchini. I dipped the tempeh in some balsamic vinegar that I mixed with small amount of orange juice, parsley, and garlic. 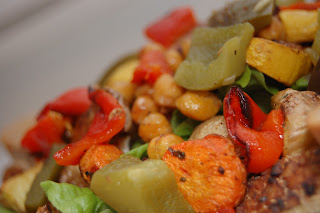 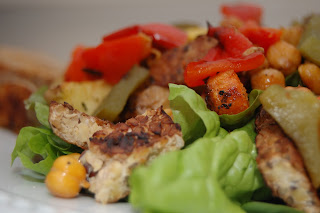 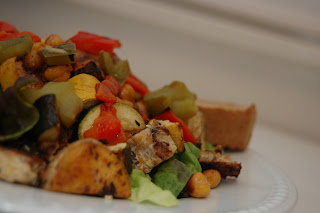 I topped it with some roasted chickpeas for some added crunch and some balsamic vinegar and served some of my homemade bread on the side. The only downfall was that it took a while to roast the veggies. I really needed to eat a full meal much sooner. I had a recovery drink after the run, but it wasn't enough.