By Heather Iacobacci-Miller February 17, 2011
Way Way Off Running Plan
So today I thought I was going to hit the trails again for another fantastic outdoor run. The temps were perfect, but the wind was so out of control. Not even gusting 23 mph, just flat out 23 mph. Um, no thank you. I might be fairly crazy, but I'm not totally crazy (ok, that might be a lie).

Anyway, as much as I wanted to run outside, and as much as I wanted to attempt to semi-salvage this week's training plan (which is so completely out the window), I hit the gym instead. I started with 10 minutes on the elliptical to warm up and then hit the weights for shoulders and triceps. I started to go with supersets (very typical) but ended up doing trisets of 3x8 followed by 2 additional exercises:

Front raise open to side - 8

After the weights I did some ab exercises before returning to the elliptical for 15 minutes.

Car Update & Kitchen Takeover
I haven't mentioned the car situation in a while. Still not found. We talked to the insurance company again today and if it's not found by next Thursday, then they will go ahead and file it as a total loss. In the meantime, they were going to get me into a rental car today. Well, that never happened.

So, two weeks later and we're still doing the one car rotation. It's not been too terrible, but I have to carefully plan any errands to make sure I can pick Jason up after work or that I have a car when I need it. We have started trying to look at what kind of car I may want to get. The thing is, both cars were paid off, and we had no intention of buying a new car for at least another year. I haven't been paying the slightest bit of attention to cars so I don't even know what I want. It's all very overwhelming to say the least.

Anyway, Jason had the car key (only one as the spare was on my key chain) so I had to meet him at his office to even get home after the gym. We got home and were sort of discussing dinner. He apparently is enjoying this whole kitchen takeover because that means he dictates what's for dinner. I was going to pull out leftover Vegan Lentil Bolognese, but he was set to run to the store to pick up a couple of things because he had his heart set on Italian "Beef" Sandwiches. 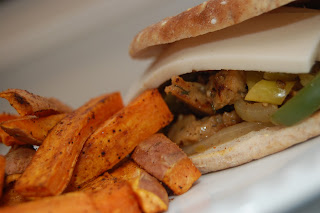 We topped with a vegan "cheese" that obviously didn't melt very well. But that's ok, they still tasted great.