By Heather Iacobacci-Miller February 26, 2011
Sort of Good Run
Today I had planned on doing at least 11 miles for my last long run before the half marathon next Sunday. We ended up having plans to go to the race track (about an hour away) with friends and also wanted to go back and look at a car. This meant we needed to get up and get the run done sooner than later.

I had hoped to be out the door by 8:30, it ended up being 9. It was sunny, about 40 degrees, and low winds. Not too shabby. I have a tendency to over dress for the cooler runs, but today I did good. Not too many layers at all. Jason, however, was overheated within 10 minutes. This is the same person who always reminds me that I get too hot. Anyway, so he's already hot and he decided to wear this particular jacket for the extra pockets. Rather than using the water bottle running belt he has, he had the brilliant idea of stashing two bottles in the back pockets.

Let's just say he quickly realized that was a huge mistake as they were bouncing around everywhere. Anyway, he was struggling big time also because of his allergies and having taken allergy meds. Totally not his ideal running day. After about two miles in, he was still not hitting a groove, but I was. I ended up going on ahead of him and met back up after a turn around then passed him again. But God love him, he kept on going.

I had a really great run up until about mile 9. I had found an awesome groove and was just trucking right along. That's exactly how I need to feel next Sunday! Anyway, this route today was super hilly. So about 9 miles in I was starting to feel the fatigue. Jason apparently decided it was time to run and caught up with me and then kept speeding up. This totally undid my groove I had going. We ended up hitting 10.5 miles before I had to just stop period. My knee was starting to feel a bit achy and I wanted to be safe not sorry.

I did try a Clif gel packet today, and that seemed to work out really well for me. The bloks/chomps were causing me to have an upset tummy for about 10 minutes after I ate them. This gel brand didn't seem to bother me at all. Big plus.


Track & Pizza Day
So, after getting back to the house I stretched and rolled then quickly got cleaned up. I heated up some veggie burgers for us to eat in the car - we were really running behind.

It ended up being a gorgeous day for the races. We had a great time with our friends as well - sat in some awesome boxes right at the finish line. 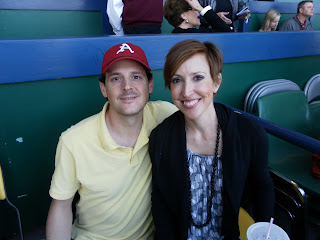 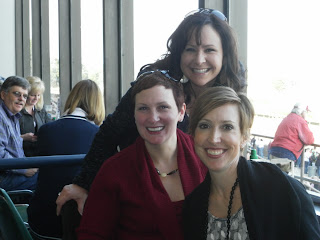 We didn't win (though we only bet twice today), but it was the atmosphere and time with friends that really mattered. Oh, and the people watching, The track is prime for people watching. You see all kinds from an older lady in an all shiny gold suit to a guy who was a total Kid Rock Wannabe.

Last night we actually had a vegan frittata for dinner rather than pizza. I worked 9 hours and didn't have a chance to get home and get the dough started early enough. Of course I had to make up for that today. So tonight is pizza for us. It's in the oven right now and smelling great.

I hope everyone has a good Saturday!