Running & Back to Cooking - Vegan "Sausage" Peppers and Herbed Quinoa

By Heather Iacobacci-Miller February 21, 2011
Running
Unfortunately I didn't have the day off like many people. If you did have the day off, no bragging please! I had originally though that I was going to just hit the gym for a bit of elliptical time and weights. I ended up opting for tomorrow's run instead because I have jury duty tomorrow and don't know what the day will hold for me.

I am trying to get back on track with my half marathon training plan this week since I pretty much tossed it out the window last week. The run called for 3 miles, 2 x(2:00, 3:00, 4:00) athletic intervals, 2 miles.

It was super windy again and drizzly out. When I left work, it looked like it was going to start raining again, so I took the run to the treadmill. Of course, the sun ended up coming out...but it was still windy. Anyway, after the intervals, I was already at 6.7 miles. There was just no way I could pull out another 2 miles, but I did round it out to a solid 8 miles.

I got home and pulled out my yoga mat (per the norm) and stretched and used my TriggerPoint Therapy Kit for about 30 minutes before getting myself cleaned up.

Back in the Kitchen
Jason had to go home for an extended lunch to watch over the Comcast repair man, so that meant he needed to stay and work a little bit later. I almost went with veggie burgers and sweet potato "fries" because I could start the fries while I showered.

But I decided I had been pretty lazy in the kitchen lately, so I went with a dish similar to my "Sausage" and Veggie Pasta dish, which is actually based off a Giada De Laurentiis recipe for sausage and peppers sandwiches. I made "Sausage" and Peppers with Herbed Quinoa.

Directions:
In medium sauce pan, bring broth, quinoa, and herbs to a boil then lower to a simmer, cover, and cook approximately 15 minutes until liquid is absorbed.

In large skillet, brown the "sausage" then set them aside.

Saute onions, peppers, and garlic in small amount of olive oil until soft. Add in wine or broth and tomato paste an allow to thicken about 5 minutes (adding more liquid if needed). Stir in the "sausages" and allow to reheat. 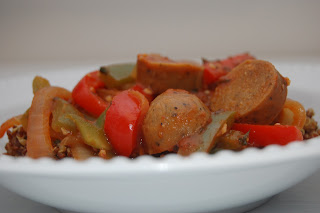 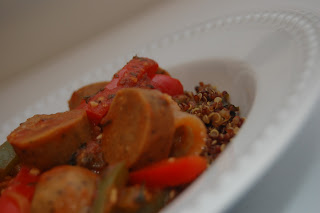 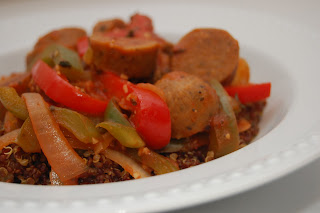 This really doesn't take terribly long to make and is also good served over pasta or as a sandwich. It was nice to make a dish that felt healthy, hearty, and homemade (but still fast). As tiring as it can be always cooking dinners, it's well worth it in the end. It's nice to take a break, but I do miss being in the kitchen.

I think perhaps it's time for a new cookbook (or two) just to spark the creative juices again though. I have a rather extensive Amazon "wish list" that I need to hit up. So do you like cooking or would you prefer to eat out? Any fave cookbooks?