By Heather Iacobacci-Miller February 14, 2011
No Cereal After All
Well, after much debate over dinner, we did not eat cereal after all. Jason ended up putting together some Toasted Tempeh and Bean Burritos by browning tempeh, along with red beans, red and green bell peppers, onions, some salsa, and typical Tex-Mex spices with a splash of lime juice. We sprinkled some whole-wheat wraps with Daiya, filled them with the mix, rolled and toasted up. 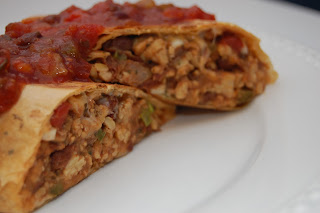 I have a feeling we'll make these again. They were tasty, filling, and fairly simple.

Monday Gym Day
It's another absolutely gorgeous day here. Too bad I didn't have a run scheduled or that's what I would have done during lunch. Trying to follow the plan (for the most part), I didn't run but rather hit the gym for back and biceps and a short elliptical stint. It's pretty much the same routine as last Tuesday. I started with 10 minutes on the elliptical then hit the weights going with 3 sets of 8 reps:

After the weights, I hit up the elliptical again for another 15 minutes, then called it quits.

Best Kind of Valentine's Day
Valentine's Day is really just any other day, but today was rather special - it was like spring. It was so pleasant walking to the car around 5:20 and the sun still being out. This means spring is just around the corner. I am sure we'll end up having at least one more cold snap, but we're sooooo close. Today was close to 70 degrees again, and it's pretty much supposed to be this way all week. Can someone say outdoor training runs??? OK, then I'll say it - outdoor training runs!!

Jason and I don't really do anything super fancy for Valentine's Day. Every once in a while we'll go eat out somewhere nice, but this year we're cooking in. The menu is a collaborative effort, and Jason is doing most of the cooking. In some form or fashion the following will be used: homemade Seitan Cutlets, roasted beets, roasted kabocha squash, spinach, and a mushroom sauce. That's the best present in my opinion.

I hope you all do the same!