By Heather Iacobacci-Miller February 15, 2011
Valentine's Day Dinner
As I promised, I logged off after posting yesterday. Jason and I had been talking about dinner ideas for many days. He decided to take on the cooking part, so I sat back and relaxed and kept him company. I had made some homemade Seitan Cutlets recently, so the plan was to use those and make some sort of mushroom sauce. Jason and bought some vegan demi-glace a few weeks back that he decided to pull out and try. We also had some beets, kabocha squash, new potatoes, one last parsnip, and spinach. 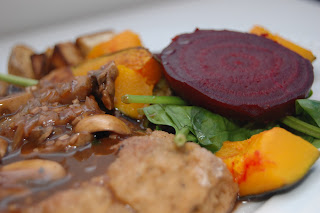 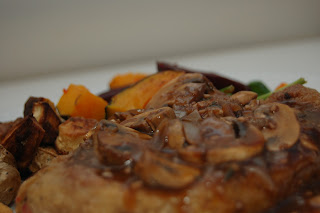 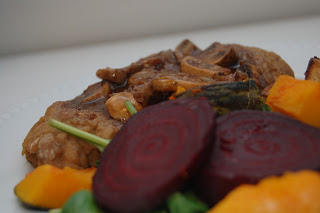 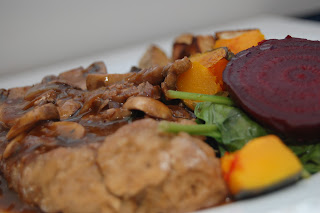 Everything was so good. I loved the earthy flavor of the beets combined with the slightly sweet and softer texture of the kabocha squash. And I think we figured out the way we like parsnips....baking the crap out of them. They cannot be even the slightest bit underdone.


Stomach Bug & Soup
We didn't do anything exciting after dinner like watch a movie. It was around 8, and I didn't think I could stay awake for a movie. We did watch a couple of Monday-night shows though, and I headed to bed around 9. I promise I'm only 36. Anyway, it was probably a really good thing I went to bed early. I ended up waking up around 1:30 really sick to my stomach. Yep, stomach bug has struck.

I tossed and turned and kept getting up. I finally decided to go try to sleep on the couch around 5:50 am. I figured Jason would appreciate not being woken up by me constantly getting up and moving around, which also wakes Maddie up. I did make it to work at 8:30, riding in with Jason. I was hell-bent on going in with him otherwise I would have no way in if I was feeling better. Let's just say I left right at 11, hit the bed, and slept almost 2 hours.

I was supposed to have a long training run today. I was really looking forward to it because it's such a gorgeous day. I had my bag packed up, my mid-run fuel ready to go, even a post-run snack. Instead, I was stuck inside, either in bed or on the couch trying to force down water and Gatorade (Jason please get another flavor than orange).

By the time Jason got home at 5:45, I actually felt hungry. Of course, I really didn't know what I could eat or should try to eat. But I had roasted up some cherry tomatoes with lots of garlic a few days ago to use as a sauce. I asked Jason to combine those with other ingredients I used for a Tomato Basil Soup. So this is based off that recipe, but definitely had a garlic punch making it a Roasted Tomato and Garlic Soup. 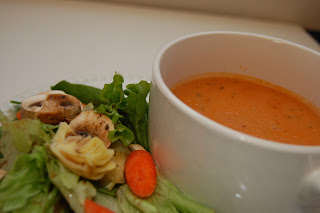 If you like roasted garlic, you'll really like this. It definitely adds a deeper flavor. This would be great with a grilled "cheese" sandwich as well. I'll admit, it was probably a little heavy for me tonight, but it was worth it.