By Heather Iacobacci-Miller February 02, 2011
Weights on Wednesday
I came pretty close to making today a rest day. But I really wanted to get in some weights and abs today and rest completely on Friday. I figured I could do trisets for biceps, shoulders, triceps and top it off with some ab work and it really wouldn't take too long to complete (and it'd give me some energy that I seem to be lacking). I did each as 3 sets of 8 reps.

I did abs from Cathe's High Reps DVD, stretched for a few minutes, then called it done. I won't say this turned into a super awesome workout. My mind was wandering a bit. But I did feel fairly strong though and actually increased weights on the third triset. This also gave me a bit of an energy boost, always a plus.

Tomorrow I have a longish run scheduled that I hope to get up the gumption to take outside (another cold one tomorrow) then a total rest day on Friday. As you can imagine, I'm dreaming of Friday for more than one reason now.

Warming Wednesday Dinner
Thankfully we didn't get slammed with the ice and snow that so many got hit with. Today was sunny, but very cold. On my way in to work, the wind chill was 6 degrees. Yikes. But, like I said, we saw sunshine. Cold days call for warming dinners right? What's more warming than a soup?

We had some soy chorizo that either Jason or I had picked up randomly. Jason mentioned using that tonight, so I thought I'd try it out in a soup. We're starting to run low on fresh veggies, but I had bell peppers, onions, some frozen corn, and frozen black beans so I went with that for a Vegan Chorizo and Black Bean Soup.

Directions:
In large pot, brown 1/2 package of the soy chorizo (the Yves brand comes in 2 links). Add in onions, bell peppers, and garlic and continue to cook until onions begin to soften.

Add in remaining ingredients and allow to simmer until flavors have melded and vegetables are cooked through. 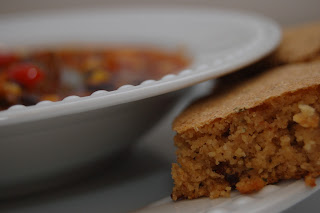 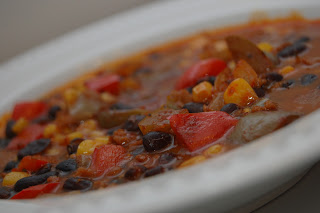 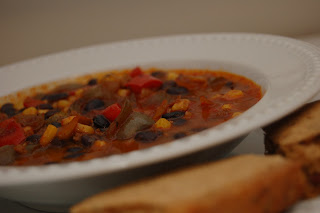 Serve with baked tortillas or Vegan Chipotle Cornbread and sprinkle of Daiya Vegan Cheddar Cheese (optional). Today I went with the cornbread. It was a good excuse to heat up the kitchen. This soup turned out really good. What's great is that you can easily adjust the spiciness to your own liking. If you don't like super spicy foods, you could substitute diced green chilies instead of the jalapenos. But I'm a spicy kind of girl so jalapenos all the way. Do you like spicy foods?