By Heather Iacobacci-Miller March 27, 2011
PuPu Platter
Last night I ended up throwing together a pupu platter for dinner as I figured I likely would. I had thawed out some tofu and decided to toss that with BBQ and hot sauces then sprinkle with panko and bake for some crispy Buffalo Tofu Strips. I made up a sundried tomato and artichoke hummus (looks brown because I added balsamic vinegar), cut up some carrots, and also cut up some almond cheese to go with vegan pepperoni and almond crackers. 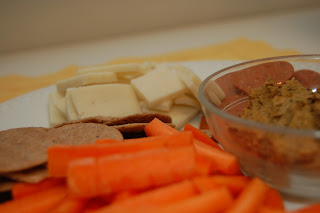 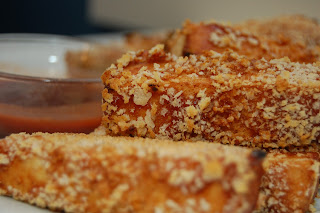 It was a fun dinner actually. It can be fun to have snacky style foods for dinner for a change. Oh and here are some pictures from last night that made me smile. 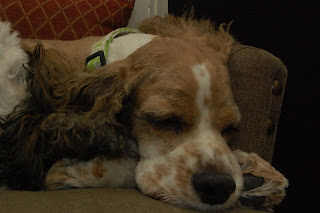 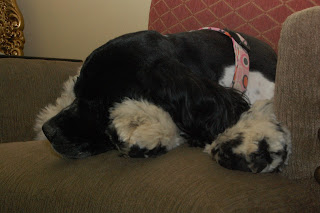 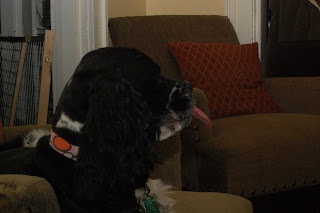 Gray Sunday
It sounds like spring has totally run away from almost all of us at this point. Today was gray and 41 degrees. I guess it wasn't raining at least. I did Day 3 of Week 3 of the total body rotation. It called for 3 sets of 15 (yes count 'em 15) reps. I did do some legs, but not 3x15.

After the weights I did all of combo 1 and just the upper only from combo 2 from Cathe's MMA Boxing then abs from her High Reps workout. This took exactly 1 hour (love it when it rounds out perfectly). I followed it up with a long stretching session.

I'll admit that I was rather dreading the sets and reps for this workout. I mean, come on, that's a lot. But, I ended up having a really great workout. Talk about shaky muscles making for interesting makeup application ;-)


Partial Errands
After the workout, I got cleaned up and we headed out to run some errands. We needed to go to Kroger, but we went to Bed Bath and Beyond instead. We had a gift card and some Christmas money left and were wanting some new curtains for the pool room. We found some curtains we both liked along with a new curtain rod (which Jason is currently hanging).

We proceeded to put of Kroger by hitting up Barnes and Noble. Jason had a gift card there as well. We both found some bargain books and I picked up a couple of magazines to enjoy while ellipticalling this week. So a second successful trip (and still successfully putting off Kroger).

Did we go directly to Kroger? Of course not. We were both getting hungry and decided to eat out instead. We did drop off the goods at the house first, so I grabbed some Quorn nuggets to take with me. We went to an Irish Pub fairly close to our house. This was the first time we'd eaten there actually. I knew they had a salad that I could get and add my protein to, so that's what I did. We love the atmosphere there. It's always just nice and cozy, very relaxing. Oh, and it helped us to continue to put off Kroger. There's always tomorrow right?

I am baking some wheat French bread right now while Jason takes care of hanging the curtains. I'm also doing odds and ends chores (in PJs of course). I think we're going to make some chili for dinner tonight. I guess that's one positive about the cool weather - we can keep on enjoying the cold-weather dinners like chili and soup.