By Heather Iacobacci-Miller March 14, 2011
Sunday Comfort Meal
I did manage to get on two coats of paint for the TV stand. My only concern is that the paint will scratch off very easily. I guess it'll due for now at least. It definitely looks better than the black that it was. 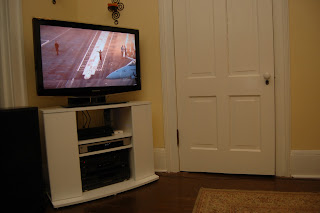 Jason, having been sick, was wanting something warm and comforting. It was fairly chilly and gray out, so soup sounded good. He originally mentioned a baked potato soup as we had two baking potatoes. I really didn't feel like that much potato for dinner. I ended up going with a made-up concoction for a chowder. I had used a recipe for a corn chowder ages ago, no idea where it is, so I figured I could wing it. Luckily, winging it worked nicely.

Directions:
In large soup pot, saute carrots, onions, peppers, and garlic for about 5 minutes, then add in the potatoes and seasonings. Allow to cook for about 10 minutes until carrots begin to soften. Add in remaining ingredients, minus the tempeh bacon.

Allow to simmer and thicken for about 25-30 minutes. Then use an immersion blender or potato smasher to slightly mash/puree (but don't puree completely) the chowder. This will create a thicker, creamier chowder. 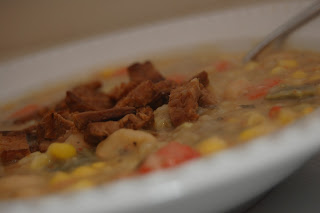 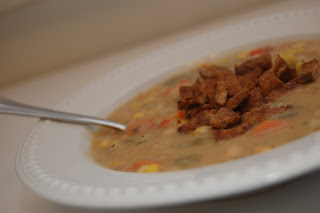 This is such a keeper of a recipe. I wish I would have made it earlier during winter! It would likely be good as a cold soup as well though.

Dreary Monday & No Energy
This morning was really rough. Not only was it tough getting up because of the time change, but we had storms roll through as well. Heath is terrified of storms, so he was banging at his kennel and freaking out. This of course meant no sleep for us. It was dark and dreary, so that certainly didn't make it any easier to peel myself out of bed.

By the end of the day, I felt like I just wanted to curl up and snooze. I came really close to forgoing the gym. But, I had my bag packed. I promised myself that all I had to do was 15 minutes and if I was still no feeling it, then I could pack it up early.

I ended up doing 30 minutes on the treadmill then 20 on the elliptical for a solid, sweaty 50-minute cardio session. It definitely made me feel better. But today was one of those days when it was really hard to determine if I truly needed the rest day or if I just thought I needed it - if that makes sense.

More Comfort on Monday
Dinner was almost going to be fajitas for Mexican Monday. Instead, we had Macaroni Monday. I know, stop and think about that one for a minute ;-) As I mentioned, Jason has been pretty cruddy feeling lately. Yesterday he wanted comfort food and we ended up with the Corn and Cannellini Bean Chowder.

He had originally wanted mac n' cheese. Mind you, I've never made mac n' cheese from scratch. I am really not a big fan of it to be honest. Jason, however, loves it but avoids it now because of his dairy allergies. So, this is something he's been wanting me to make for a while now - a vegan version to boot.

Cook pasta according to package directions and drained.

In medium saucepan, melt the vegan butter and stir in the nutritional yeast flakes and flour until completely incorporated. Add in milk, spices, and flax. Allow to simmer and thicken being sure to whisk often (about 15 minutes). When thickens, add in the Daiya and turn off the heat whisking it in until fully incorporated.

In a prepared baking dish, add in the pasta and pour the "cheese" over the top and combine (can also do this in a separate bowl). Top with a little more Daiya and panko bread crumbs. 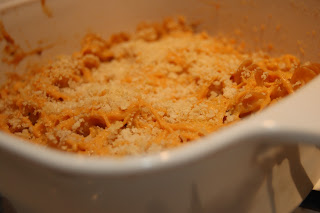 I served this with roasted onions, squash, and zucchini seasoned with salt, pepper, minced garlic, drizzle of olive oil, and parsley and baked BBQ Seitan Patties. I took homemade seitan patties and simply basted them with a BBQ sauce (preferably no corn syrup). I baked for 15 minutes then flipped, basting again and baking another 10 minutes. 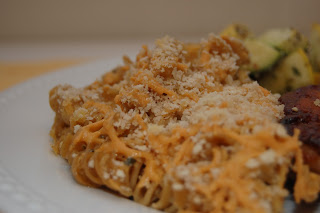 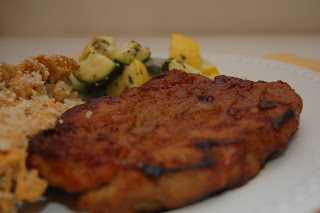 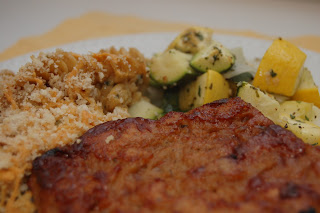 The verdict? Jason was really happy with it. He said it was rich and creamy and better than anything out of a box. So, I guess my job here is done.