By Heather Iacobacci-Miller March 06, 2011
Half Marathon Eve (More)
When I say I have some amazing blog friends, that's just an understatement. You all have no idea how much I appreciate your support and good luck race wishes. To top it all off, Lindsay (from Cotter Crunch) sent me a package and card that arrived just in time to use for my race eve dinner.

In all honesty, I hadn't really thought much about my dinner plans. I had my breakfast planned, my mid- and post-race fuel all planned out, but dinner...not so much. Lindsay had told me that she had sent something my way. And here's what it was: 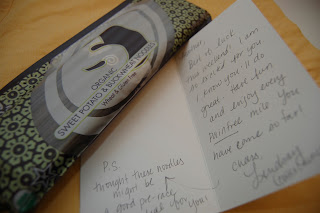 Seriously, girlfriend was trying to make me cry! So dinner was based completely around Lindsay's treat. Sweet Potato & Buckwheat Soba Noodles with a Sweet Potato and Roasted Red Bell Pepper Sauce.

In large skillet, slowly saute onions until translucent. Add in soba noodles, sweet potato puree, spinach, and broth (to consistency) and cook until spinach is wilted, reasoning if needed. 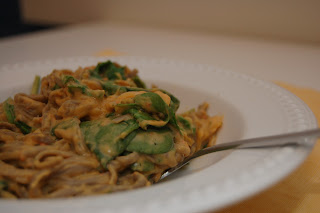 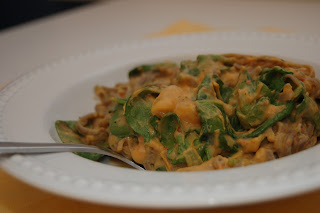 This was really tasty. It does make way more sauce than needed, so if you're not planning to freeze the sauce for later use (which I am doing), you will want to half the recipe. the next time I make this, I will also top with toasted pinenuts for added crunch and texture.

Race Day
This morning I woke up around 5:50 am (good thing too because alarm was set for 6, but on weekday mode, meaning it didn't go off). I had everything laid out and ready to go, but really started questioning my clothing because it was much colder feeling (really damp cold and windy) than expected.

I ended up going with long pants and thankfully took a running jacket normally reserved for sub-20 degrees. I didn't shed that sucker until 6.2 miles in (which you can see in a picture by the way).

I had half of a bagel with peanut butter and banana sprinkled with cinnamon. I wasn't really hungry at all, but knew I had to eat something that would stick with me, but also digest easily. A tricky combo that one.

We got down to the start area around 7:25, and it was freaking cold. Cold as shit to be flat out honest. Everyone seemed really surprised by how cold it felt. Definitely not the forecast. I think it was the dampness that really was causing it to feel worse...and no sun. Anyway, I did good and didn't get too worked up. I think it helped knowing I had the pacers to help me out and keep me from blowing out too fast. It was sort of a comforting feeling.

I really felt good for the majority of the race. I had worried that the cold would affect my run negatively as I hadn't run in sub-40's in several weeks. I kept up with the pacers, even met a new friend along the way and held strong. I just kept smiling to myself thinking of all the encouragement you all have given me. I will admit to wishing for a ray of sunshine, just a hint at the very least. The first 6 miles were really mostly a blur to be honest. I pretty much didn't even feel the hills and inclines along the way....not until about mile 9 of course.

It was so weird to pass by my own house. The pacers were actually talking about the neighborhood and I told them we were passing by my house. Jason tried to get a picture, but he snapped just as I was cut off by someone. I really didn't start to "feel" it until right around 11 miles into the game. That's when things started to get tight, legs wanted to revolt a bit, and I started to get a little lonely and stuck in my own head. I did a few butt kicks to change the motion of my legs at least and tried to clear my head. I was soooo close. I knew it. It was mostly downhill from there (thank goodness).

Jason cheered me on again at 11.5 miles in - though I was not in the chatting mood at that point. I think he took the hint and moved on along to meet me at the finish. I stated to try to pick up my pace at mile 12 and take advantage of the downhills (finally). I was able to push it out and actually full on sprint the finish. I thought my time was 1:54:09, but right now the unofficial is showing 1:54:02. Either way, super happy with my time. I was 20th out of 269 in my age group and 114 out of 1720 women. Not to shabby for my first half! 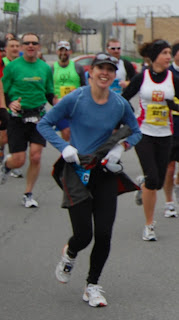 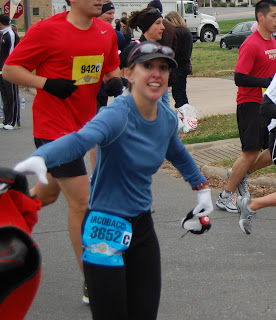 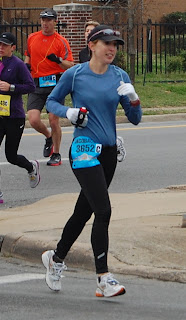 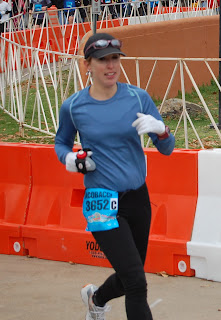 This picture was taken right before (in Jason's words) I turned blue. 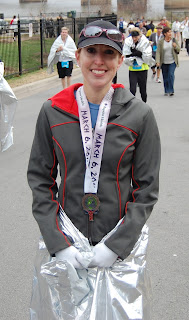 I was feeling pretty good right after the race, then I started to get colder and colder to the point where I really was fairly blue and shaking from head to toe. I probably should have gone to the medical tent, but all I wanted was to get into the car with the heat blasting. Once I get warmed back up, though I was really chilled the rest of the day, I was pretty much ok....except for some major hobbling along. Let's just say that tomorrow will not be a leg day, a cardio day, an anything but chillaxing kind of day.

Again - I want to thank all of you for your incredible support, advice, and kind words. I also appreciate those of you who followed via Twitter and/or Facebook. You guys are the best!