By Heather Iacobacci-Miller March 13, 2011
High Rep Day
I really hate the time change. Ok, so hate might be overkill. I love that it stays light later. That part is fantastic. But to lose an hour on the already short weekend? I felt like I was already behind when I got up the morning. Not the best way to start the day.

It was sunny at least, for a bit I should say. I got out of bed at 8:30 (feeling late of course). I had my breakfast then piddled a bit before getting to my workout. Today is Day 3 of Week 1 of the total body rotation. It called for 2 sets of 15 reps done as straight sets.

I did the high intensity HiiT segment from Cathe's Intensity workout to hit the legs more then did just 2 combos from MMA Kickboxing (love boxing/kickboxing after upper body weights) then the abs from High Reps. Sounds like a ton, but it took just over an hour all together.

Honesty
We had thought we were going to go help my sister move today. But she didn't call back last night or this morning. She did finally call while I was working out, and by the time I got done and returned the call, she said everything was under control. They had gotten everything pretty much packed up and loaded yesterday, so today was just unpacking.

I know this will sound ugly (but I'm honest), I was sort of happy not to have to drive down there today (an hour away). We're going to be there next Saturday for a housewarming party. And with gas prices, already one hour missing from the day, I just wanted to be home and get things done that needed getting done: laundry, grocery store, cooking off chickpeas, more weeding in the garden and flower beds.

Does that just sound awful? Because I do sort of feel pretty awful for thinking that way. I feel so protective over my weekends sometimes. Do you ever do that or think that way? You know you should do one thing, but don't because you're selfish?

Home Work
I did manage to get quite a bit done today. We hit up Kroger, I got laundry washed, more weeding done in the yard and started on a new painting/decor project. We have to have a corner tv stand because we chose to use the dining room as the living room because the living room is the pool room. We found a black corner stand many many many years ago.

It's not special. It was about 80 bucks from Wal-Mart. Definitely not real wood. The glass front door has long since vanished (meaning it was broken in a sad candle accident). But any other corner stands we like are costly. Since I painted the trim in the living room white, the black just really stands out in a bad way.

I finally decided to try to paint it. Granted, not real wood...so may not work. But it was worth a shot at least. I did two coats of primer so far. As long as the outside surfaces take the paint, I'm far less concerned about the inside of the unit. Here is what it's looking like after two coats - some of the black is still showing through on the insides, but that will be hidden by doors at least. 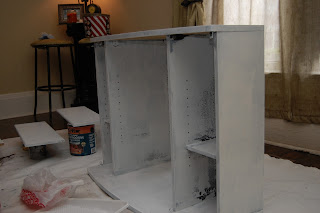 Fingers crossed this works or we're going to have one ugly stand until we can save up for a nice one! Do you ever start a project that you're not sure is going to pan out? Or are you really careful about such projects?